I was sorting through some of my “Ideas” folders for new ideas for some topics of discussion to share with you and I came across an old paper hurricane tracking map for Hurricanes Dean – August 1-5, 1989; Hurricane Gabriel, September 3-6, 1989; and last but not least, Hurricane Hugo, September 13-18 and moving on for a direct hit in South Carolina also.

In the years before cell phones and the internet, we would listen to the weather on Channel 16 and local weather channels on our VHF radios and single side band radios for weather updates.  We would get the latitudes and longitudes and track the storms ourselves.  We would even be able to see trends by “connecting the dots”.

I thought it might be fun and interesting to give you some statistics from the three storms shown on this old tracking map.  1989 was a very active hurricane season for the tropics.  I’ll talk about these three storms chronologically, starting with …. 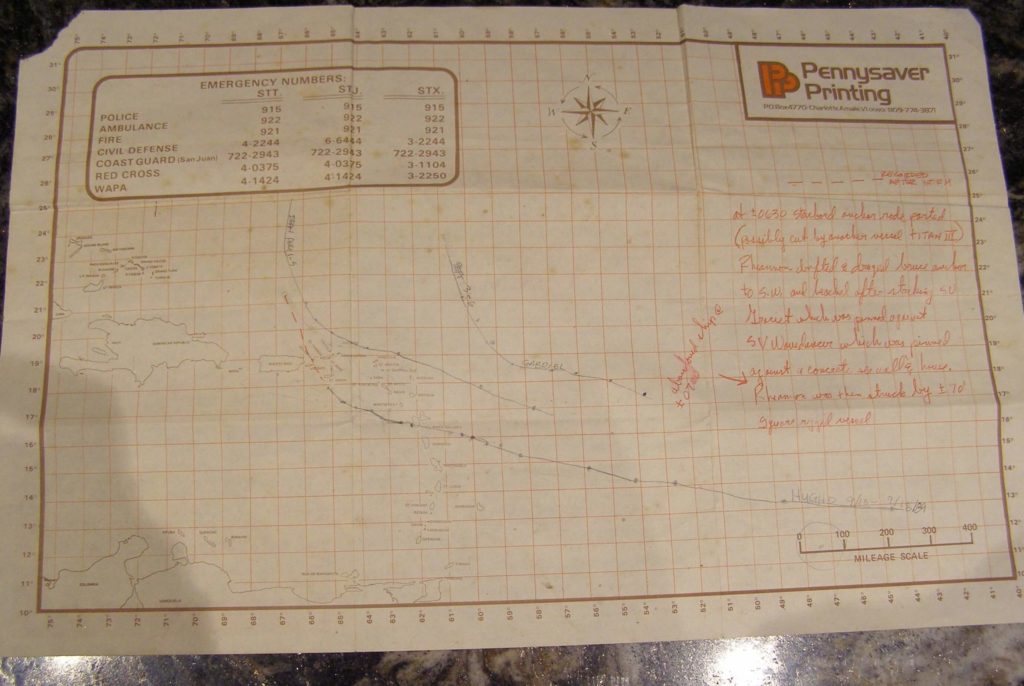 Hurricane Dean came off the Cape Verde Islands and skirted the Caribbean for the most part tracking to the North, but eventually took direct aim at Antigua.  It formed on July 31 and remained hurricane status until August 9.

It was the 4th named storm of the season and the second hurricane of the 1989 Atlantic season.  Dean reached tropical storm status on August 1 east of the Leeward Islands and brushed the northern Leeward Islands as a Category 1.  He then turned north, striking Bermuda as a Category 2 and continued up to Nova Scotia and Newfoundland. 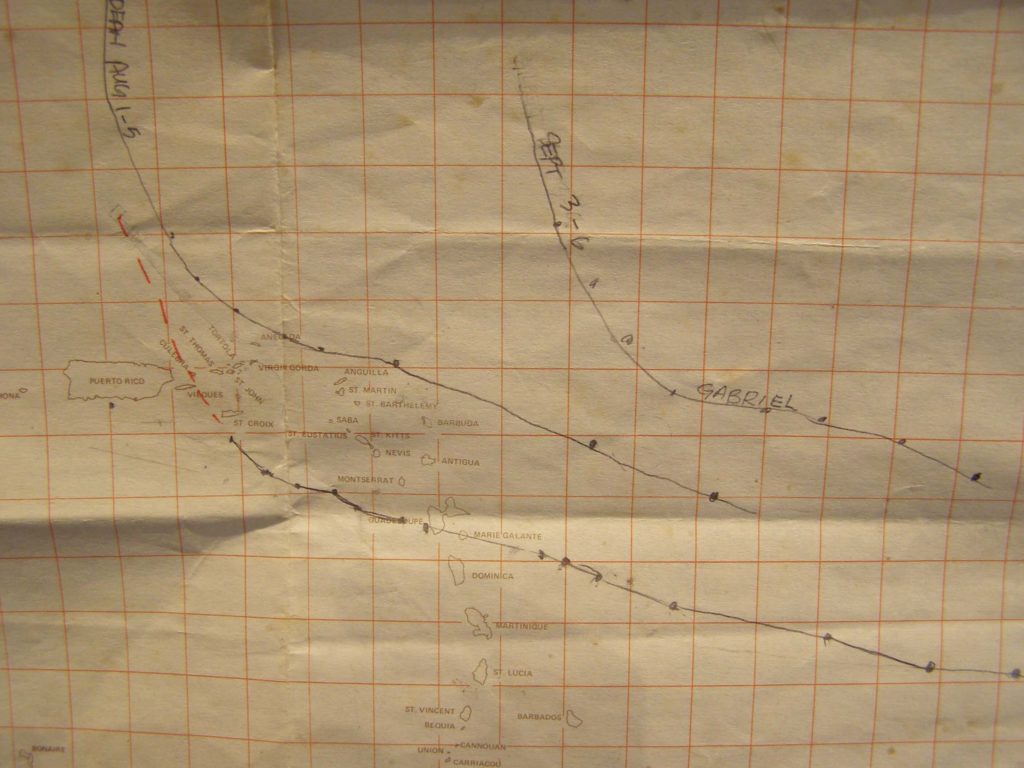 Then a month later, Hurricane Gabrielle tracked out to sea.  However, she was a powerful storm causing 9 fatalities despite remaining hundreds of miles offshore with her high winds of 145 mph; she created large storm surges and huge waves.  She formed on August 30 and marched past the Windward Islands of the Caribbean into the first week in September.  Gabrielle was the 7th named storm of the season and the 3rd Atlantic hurricane.  She reached a moderate Category 4 status and then weakened to a Category 2 as she passed east of Bermuda.

Then there was Hurricane Hugo, which impacted my life in a big way.  You can read my blog series back on page 7, Parts 1 through 5, and an Addendum article on page 6 back between July 5 and August 16 of 2014 when I first started this website.  It’s an interesting first hand story of my “hurricane adventures” and I encourage to read it – it will take you right into the middle of it!

For this article, I’ve kept my information to the statistical side of the 1989 season.

Hugo formed on September 10 and raged on until September 25 after he wreaked havoc through the Cape Verde Islands and the Lesser Antilles passing over Marie Galante and Guadeloupe.  Hugo then came close to Montserrat, and moved on to St. Croix and then the Puerto Rican islands of Vieques and Culebra, and extremely close to Fajardo, Puerto Rico.  Hugo cost $9.47 billion in damages; and caused 60 fatalities between the U.S. Virgin Islands, Puerto Rico, and the Southeast Coast of South Carolina.  These statistics made it the most damaging recorded hurricane of its time.  It has since been surpassed by multiple storms and is now ranked the 17th costliest in the U.S. 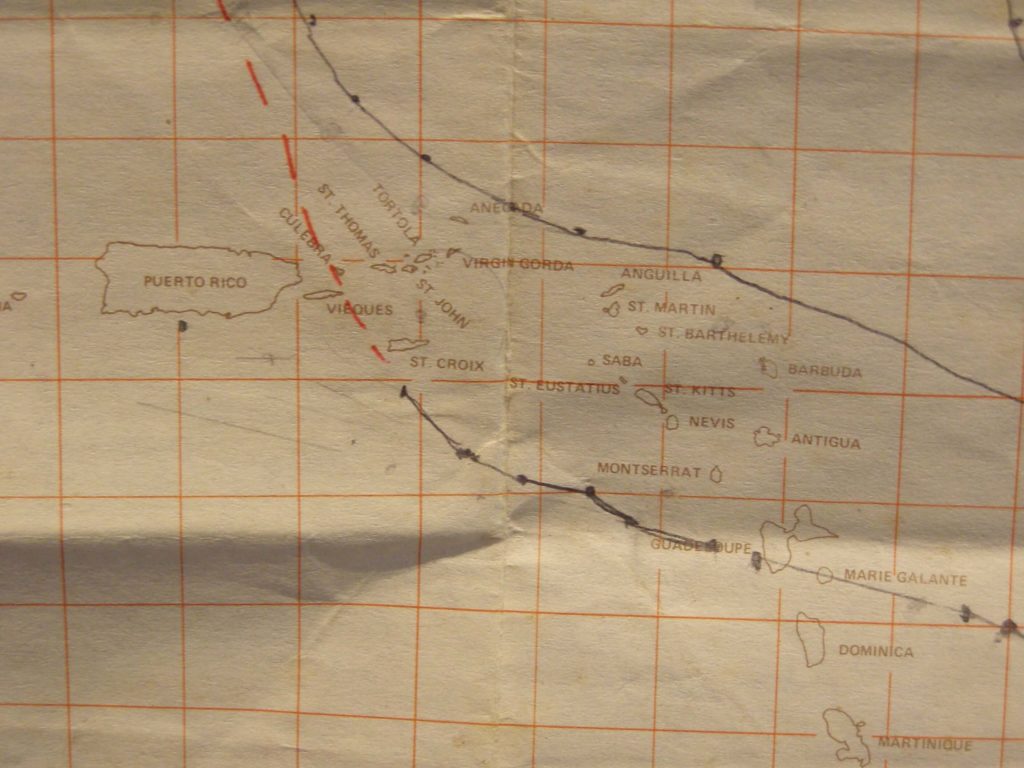 When Hugo had finally left the devastated U.S. Virgin Islands and Puerto Rico in its wake, it took a direct path to the coastline of South Carolina.  He made landfall just slightly north of Charleston on the Isle of Palms on 9/22 with 140 mph winds.  It also visited Sullivan’s Island on 9/22 as a Category 4 storm, wreaking damage upon damage and devastating the coastline communities. 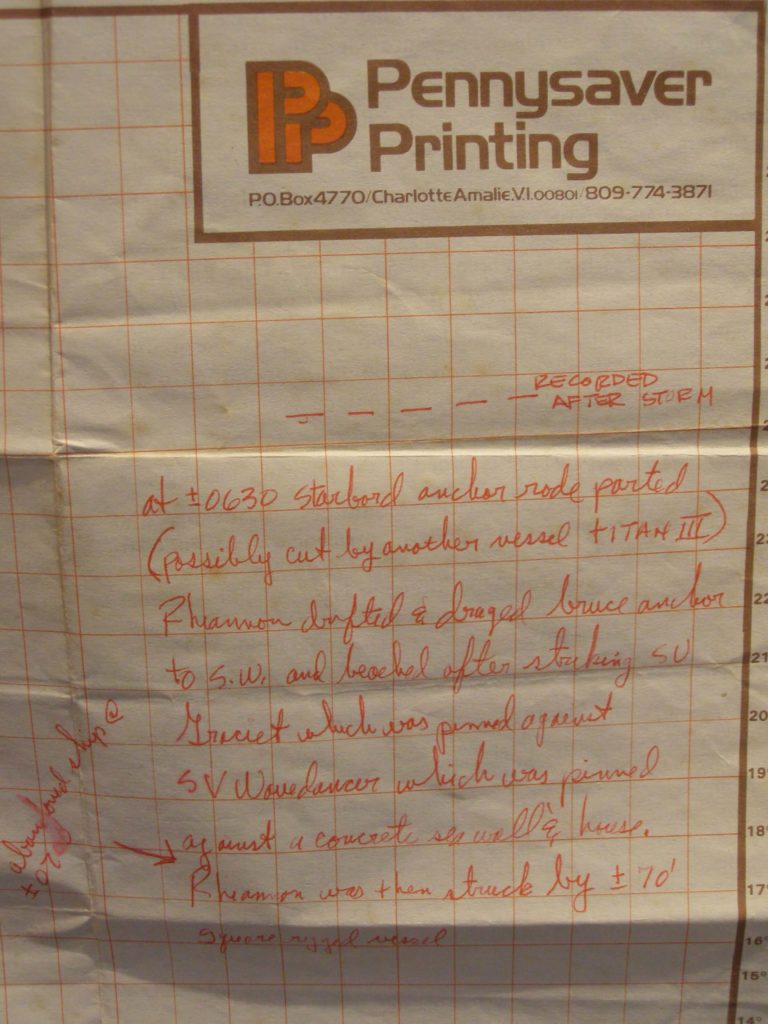 A Cocktail to Lick Your Wounds …

I’ve got an interesting adult beverage that was concocted in honor of these dangerous and destruction storms called “The Hurricane Cocktail”.  It’s a great beverage to wind down after the storm!   I found this recipe on Google.com.

Ingredients in The Hurricane Cocktail 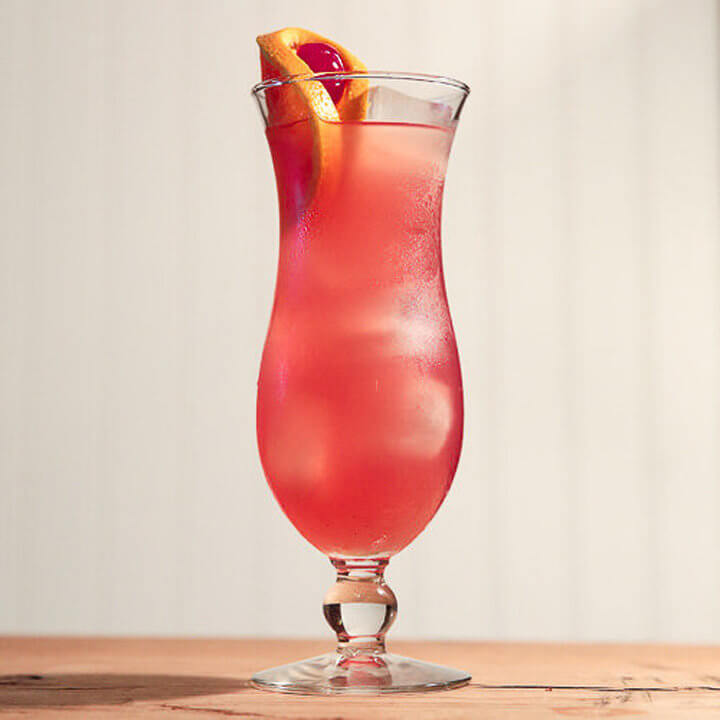 Hurricane Season begins every year on June 1st.  Before any dangerous storms, you should always be prepared and there’s quite a list of items to have handy, such as batteries, blankets, lots of bottled water, a BBQ grill with a good supply of propane, and lots of food items that don’t need refrigeration.  It’s always good to have protein bars, PB&J, crackers, other great sources of protein, etc.  Also make sure you have flashlights (not candles), a portable radio, a charged cell phone, good shoes or sneakers on your feet, food and leashes ready for your pets, and last but certainly not least, any necessary medicines and your insurance and legal docs in a safe and secure waterproof container.  If you have a generator, be sure that is not used inside your home or in your garage.  Tie the gas cans together and lash down outside in a safe and secure location.