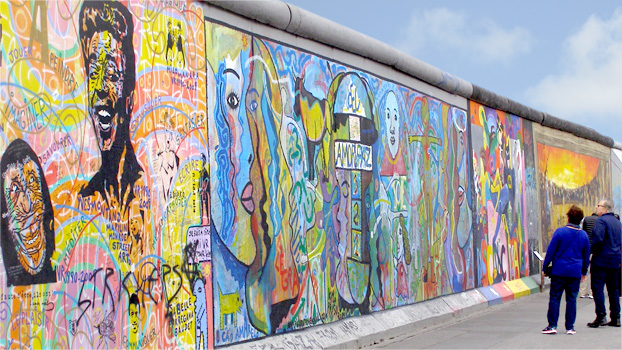 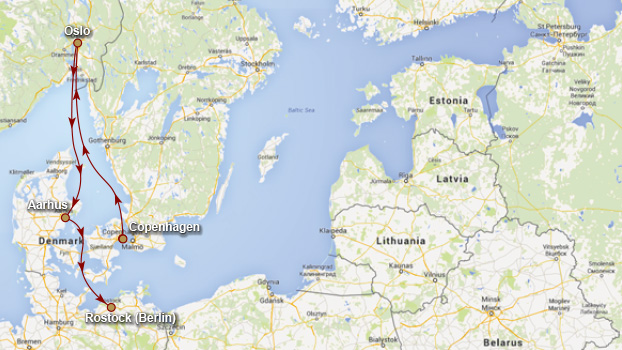 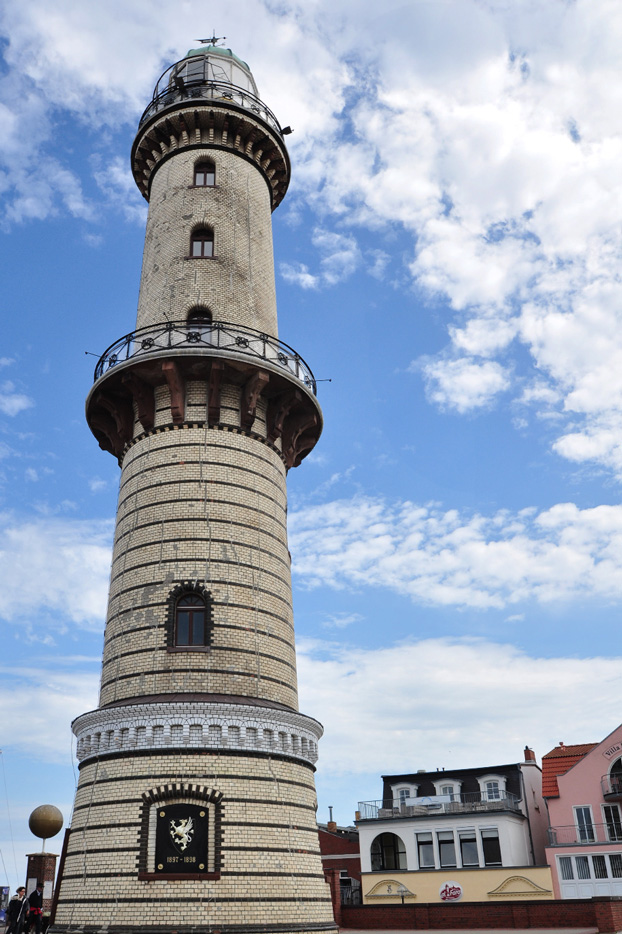 The ship arrived in Warnemünde (Rostock), Germany on Thursday, June 18…

We were scheduled for an early start… 7 am at our designated meeting area for a quick trip through passport control, a long walk to the chartered train, and a 2.5 hour, non-stop train ride into Berlin. We had arranged a wake-up call and ordered room service breakfast to cut down on the running around in the morning. Hallelujah! Our plan worked beautifully.

It was a bit cold and damp on the walk to the train, and some showers were predicted for the morning, but sunshine was expected for the afternoon. One can only hope! The weather wasn’t optimal during this vacation, but the stops were so awesome, it made it easy to say, “Oh well, let’s just put on another sweater and bring along our raincoats and umbrellas… off we go!” We were, however, wearing the same clothes over and over, because we had packed and hoped for warmer temperatures.

Anyway, the train looked almost brand new and was pretty comfortable. We were given coffee, water and snacks along the way. We quickly left the Warnemünde area. The scenery along the way was pastoral with farming and dotted with horses and cows. I will admit, however, that I didn’t see much of it while I was checking my eyelids for holes and managed to doze off.

Once we arrived in Berlin, we were transferred to our motor coach and our first stop was the Berlin Wall remnants. I was stunned by how short and thin the wall is. It looked to be about 18 feet. Somehow in my mind’s eye, I guess I imagined it like a towering wall. Anyway, it was mesmerizing with its graffiti and round tops. I was told the round tops were so that a person couldn’t get a firm grip. 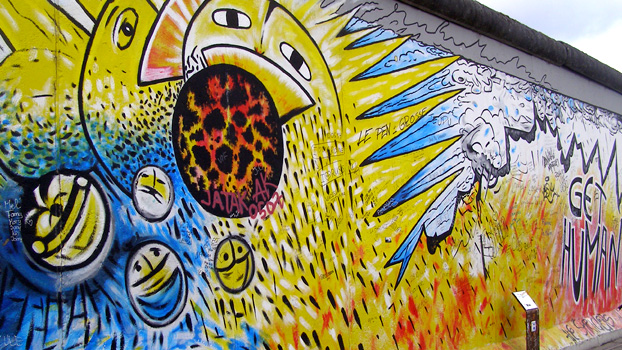 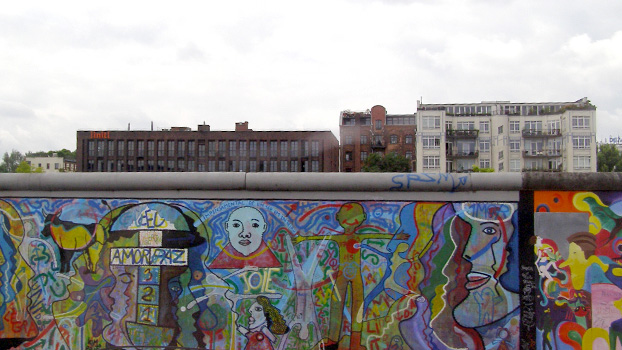 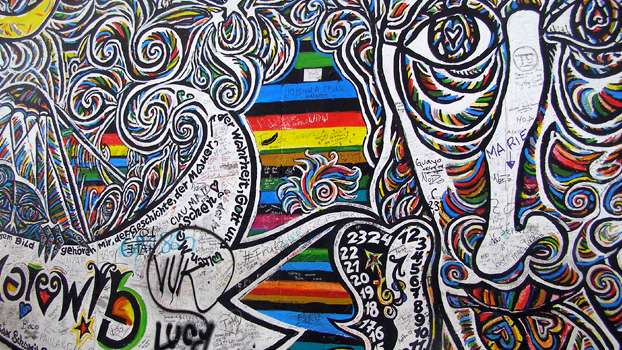 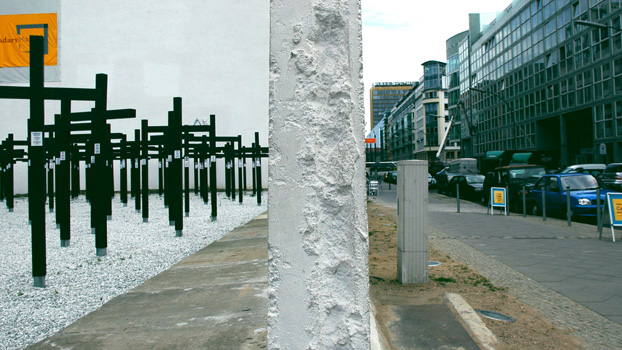 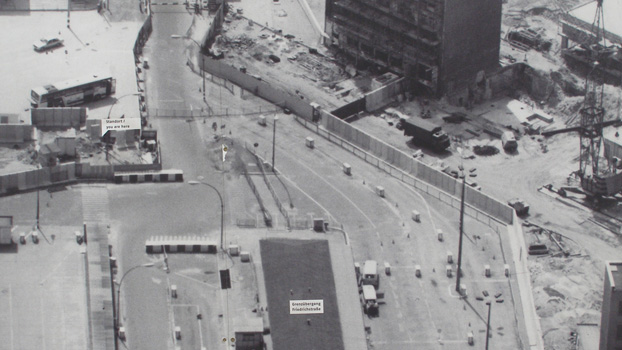 After this, we hopped back on the bus and took a short ride to Checkpoint Charlie. During the Cold War, the Western Allies named the best-known crossing point between East Berlin and West Berlin, Checkpoint Charlie. It was the symbol of the Cold War, the separation between East and West. It’s an interesting site and I enjoyed it, however, this is now a replica and is not manned by soldiers… just as a recreational concession. It is now a tourist attraction and located in the Allied Museum in a neighborhood of Berlin called Dahlem. We would see the original building displayed at the Allied World War II Museum at the end of the day.

From here we visited the Brandenburg Gate; saw the Reichstag (German Parliament), and the Siegessäule (Victory Column). We stopped for a quick look at the Gendarmenmarkt, where the German and French cathedrals and the concert hall are located. 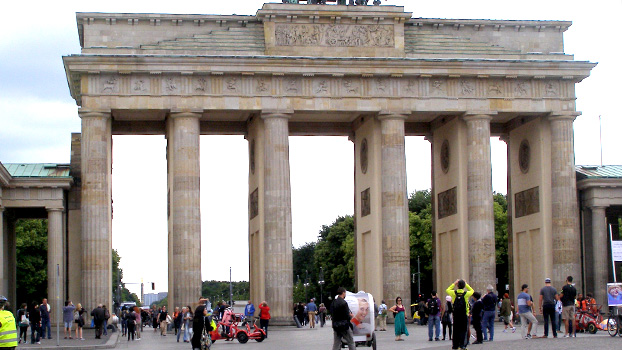 The Brandenburg Gate is an 18th-century neoclassical triumphal arch in Berlin. 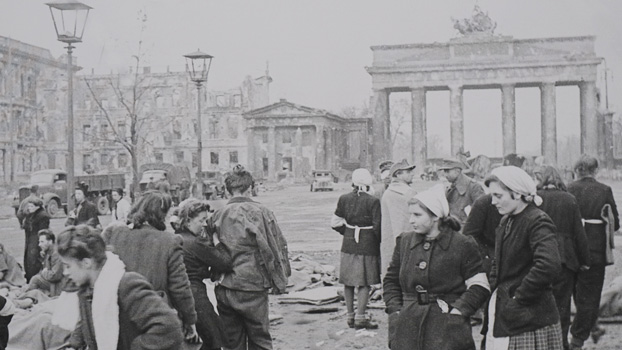 It was commissioned by King Frederick William II of Prussia as a sign of peace. It suffered considerable damage in World War II. 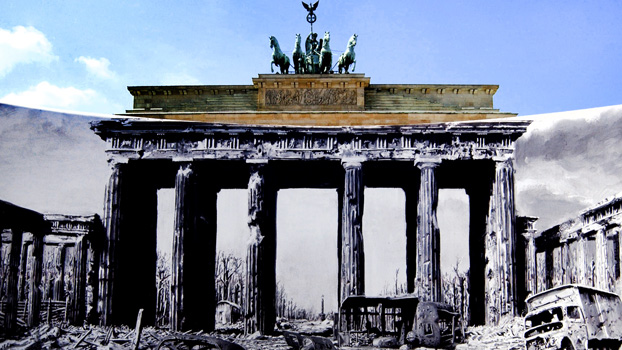 From here we walked to the Memorial to the Murdered Jews of Europe, also known as the Holocaust Memorial. This was a much understated memorial and yet it had tons of impact on me. You could physically feel the sadness and pain here. You felt you needed to whisper and be respectful. I came close to tears. It was also, however, peaceful at the same time. There was a reflection pond and around the pool were stones engraved with the names of all the concentration and work camps. I came away from this memorial reflective and I am still thinking about it today. I even re-watched Schindler’s List this week, and taped a story of a camp survivor’s tour of Auschwitz. Dianne and I both agreed we did not want to visit one of the camps, which was offered as one of the tours. We are glad we did not, as we heard from many people later on it was heartbreakingly sad and disconcerting. They felt there was a lingering feeling of sad spirits everywhere. 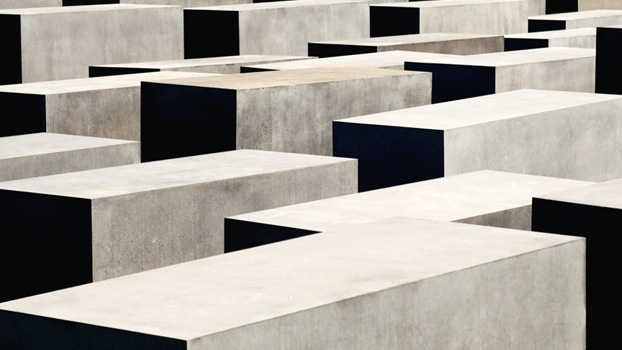 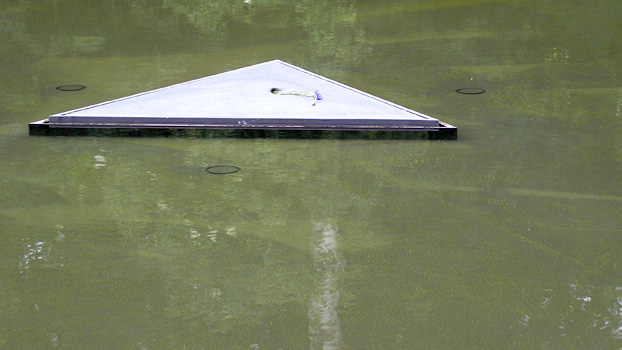 The reflecting pool is dedicated to the 500,000 Sinti and Roma murdered by the Nazis in the Holocaust. 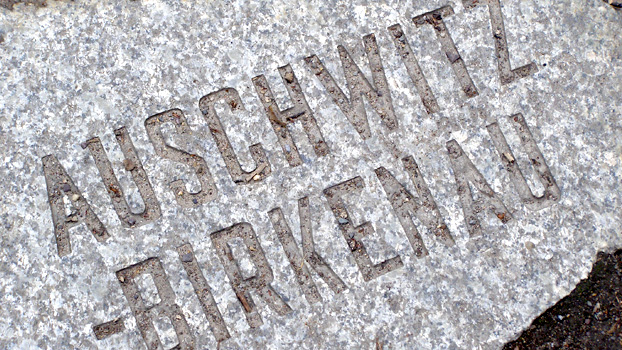 Auschwitz-Birkenau was the largest of the Nazi concentration and death camps. During World War II, more than 1 million people lost their lives at Auschwitz. 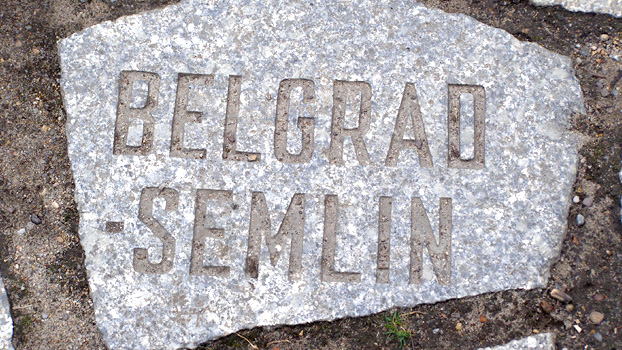 Between 1941 and 1944, approximately 20,000 people perished in the Semlin concentration camp in Belgrade, Serbia.

From the memorial, we stopped for a planned lunch in the hotel Crown Point Hotel. I have to say the lunch buffet was nice, but underwhelming considering my expectations… I had been hoping for a schnitzel, red cabbage and spätzle lunch. It was one meal I’d really been looking forward to. Oh, well! At least we were fueled for the remainder of the day’s excursion.

We made a quick stop at another memorial in the Neue Wache building, which was constructed in 1818 as a guard house for the Palace of the Crown Prince. It continued to serve as a guard house through World War I. In 1931, it was redesigned and became a memorial for the German soldiers who died in World War I. In 1969 an eternal flame was lit in its center. In 1991 when Germany was reunited, a single statue replaced the flame. It was designed by Käthe Kollwitz, who lost her youngest son in WWI. The pietà, Mother with Her Dead Son, is a bronze statue of a mother with her fallen son. We only stayed a few minutes. We were then given free time to shop and take a restroom break. Dianne did a quick stop in a souvenir shop, but we were more concentrated on a pit stop and managed to score a potty break without having to wait in a long line at the Hard Rock Berlin. 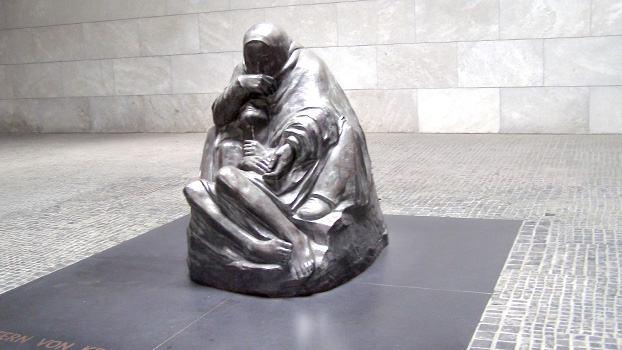 Designed by Käthe Kollwitz, who lost her youngest son in WWI. The pietà, Mother with Her Dead Son, is a bronze statue of a mother with her fallen son.

I don’t remember the exact sequence of this event, but a quick story of one place might make you laugh… We passed this spot that was just a sidewalk and a parking lot… What is interesting about this is it was the exact spot of Hitler’s bunker and demise. Hitler’s bunkers have since been destroyed and replaced with a parking lot. A couple of the gentlemen aboard the bus generously offered to jump out and go “water” the wall where the old bunker stood and where Hitler died, symbolically “watering” the war criminal’s grave.

Our last stop was at the World War II Allied Museum. It was here where we saw the Checkpoint Charlie booth and several of our allied military generals’ uniform were on display. We also saw a replica of the inside of a bomb tunnel and where supplies were kept.

We were all exhausted by this point and were relieved to board the bus for the trip back to the train station, and our ride back to the Regal Princess.

By the time we returned to the ship, the temperatures had dropped. It had gotten windy and the sea was choppy. The Regal Princess handled it like a dream – hardly any movement at all! Most of the time I was aboard, I would forget I was on a ship. I’d get surprised when I’d look out a window and find us speeding along over the sea.

We were enthusiastically greeted into the Symphony Dining Room by our great team. This night I enjoyed:

The next day was our first sea day, so we had decided on an afternoon at the spa. After dinner we decided to check on our appointments… Dianne was set for a seaweed wrap, and I was set for a reflexology massage the next day – my aching feet were in definite need of help. Afterwards, I had to go the front desk because my access card’s magnetic strip wasn’t working. It turns out the magnet in my evening clutch was demagnetizing it.

I was convinced my best bet for authentic, quality Russian nesting matryoshka dolls was onboard. Matryoshka is a diminutive form of the name “Matryona”, a common female name in 19th century Russia. I purchased my planned gift to myself right then and there. It turned out to be a great idea, because when we got to Russia, there wasn’t ever enough time to shop, and I didn’t want to purchase dolls for the sake of purchasing dolls. I wanted an authentic set worth the investment.

We decided against attending the show in the Princess theatre and opted to just sit and enjoy a cocktail – Dianne opted for a double sambucca on the rocks and I enjoyed a double Frangelico® on the rocks. We were entertained by Rhapsody in the Piazza until we were ready to retire, which we did early. Berlin was wonderful, but a long day. 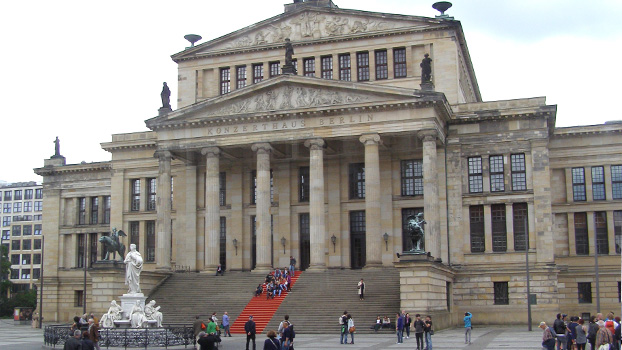 The Konzerthaus Berlin is a concert hall situated on the Gendarmenmarkt square. It was built as a theatre from 1818 to 1821 and later changed to a concert hall after the Second World War. 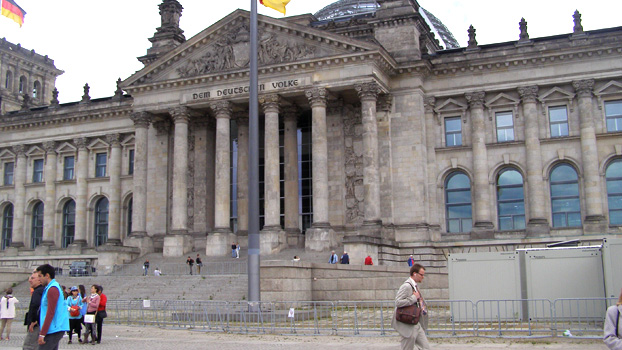 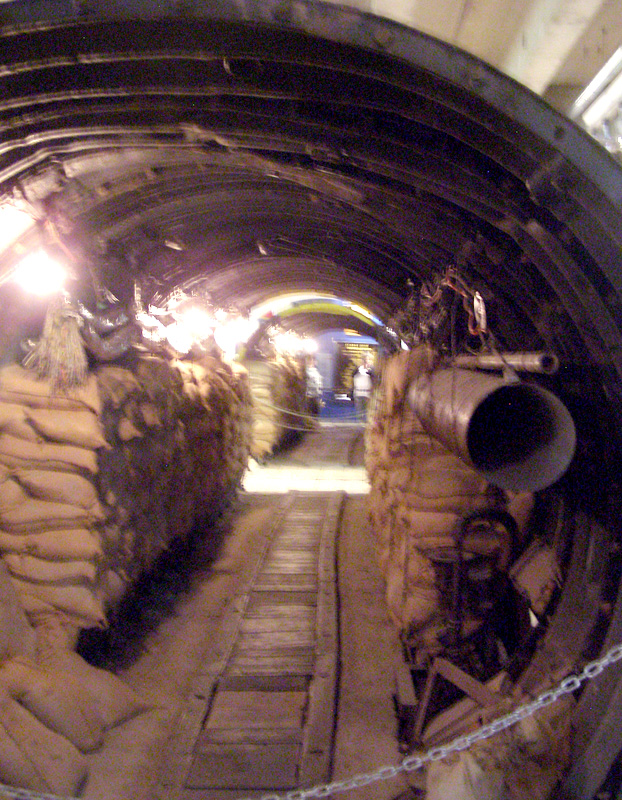 Bomb tunnels and bunkers are located below street level throughout Berlin. 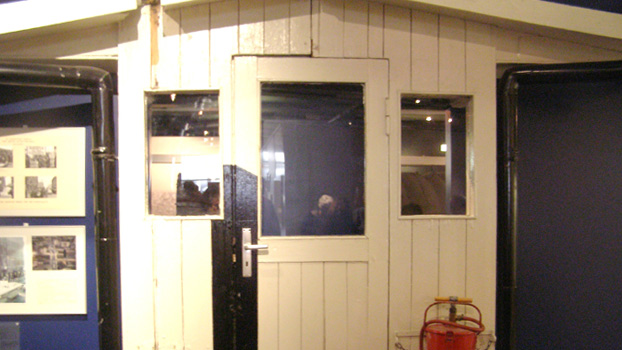 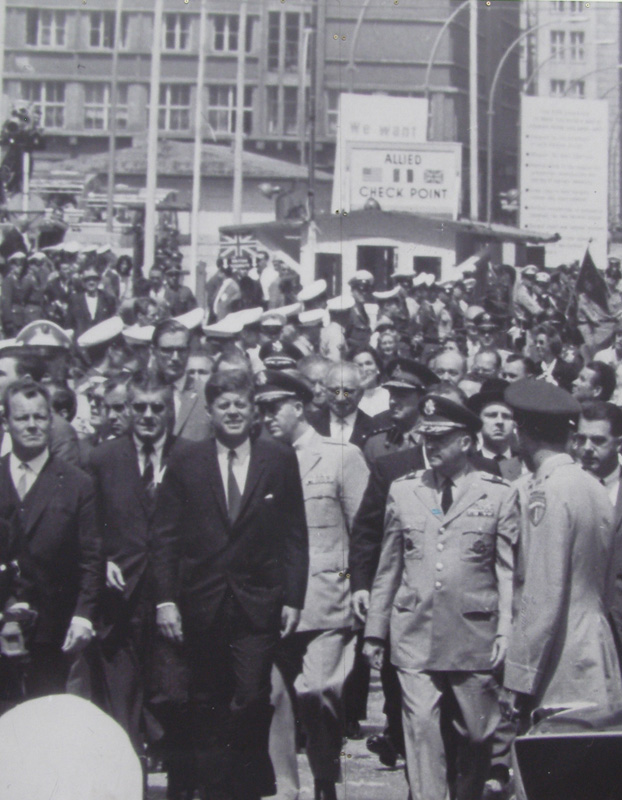 In 1963 President Kennedy delivered a short speech that became one of his most famous. It was so well received that the square where it took place was renamed John F. Kennedy Platz. 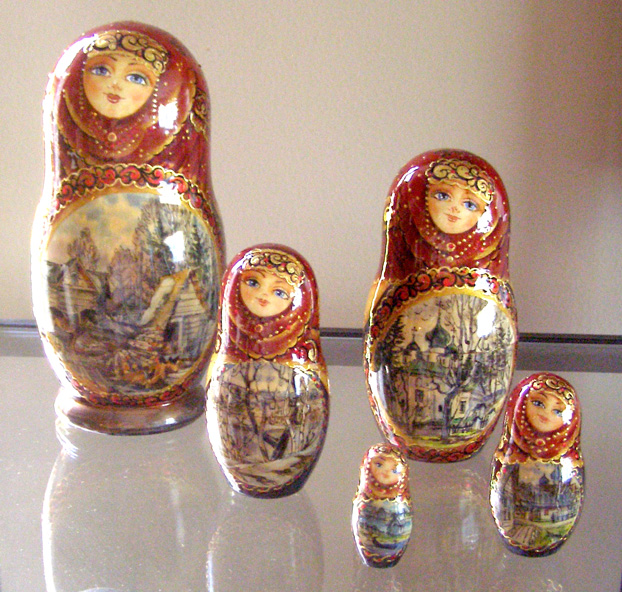 My Russian nesting matryoshka dolls that I purchased at the Princess Regal’s gift shop.