This easy recipe is a modified version of the classic recipe for Bananas Foster which was created in the 1950’s in New Orleans, LA where the Port of New Orleans was the port of entry for bananas shipped from Central and South America.  In 1951, the Owner of Brennan’s, Owen Edward Brennan challenged his talented chef, Paul Blangé to create a new culinary creation using the imported fruit as the star ingredient.  The recipe was to be published in a feature article on the restaurant.

The scrumptious dessert was named for Richard Foster, the owner of the Foster Awning Company who frequented the restaurant and was a very good friend of Owen Brennan.  They served together on the New Orleans Crime Commission.  This Commission dedicated itself to the civic effort of cleaning up the French Quarter.

Bananas Foster is to this day still the most requested item on the restaurant’s menu and is now known internationally.  35,000 pounds of bananas are flamed each year at Brennan’s in the preparation of its world-famous dessert.

I’m sure that the article about Creole Cooking in New Orleans that was published in 1957 in the New York Times by the then Food Editor, Jane Nickerson went along way in the promotion of this recipe … Something I hope could happen for me one of these days! 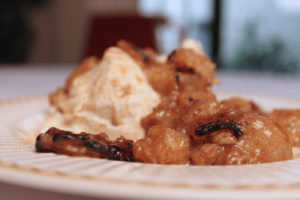 This original recipe is deceptively simple.  My adaptation is even easier and quite a lot safer! There’s no flaming liquor!  I suggest we leave the flaming dishes to the professionals!

I also know that not everyone has banana liqueur in the liquor cabinet.  My Banana Rum Salsa uses dark rum only.  I also added chopped toasted pecan pieces for some texture. 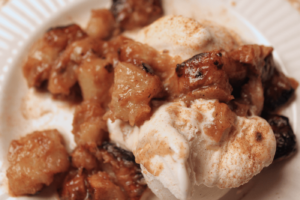 Try serving this over vanilla bean or rum raisin ice-cream.  If you want to make this recipe a little more substantial for serving to your guests, try putting the ice-cream and salsa over a slice of pound cake or angel food cake.  I found myself making this for myself in the evening for my TV watching snack (yes, a fattening one!) once in a while!  You’ll find yourself doing the same if you have bananas in your cupboard! 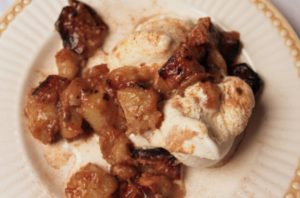 View all posts by The Yacht Chef →
Hurricane Storm Tracking, Circa 1989 in the Caribbean-The Antiquated Method
ASPARAGUS and BOW TIES