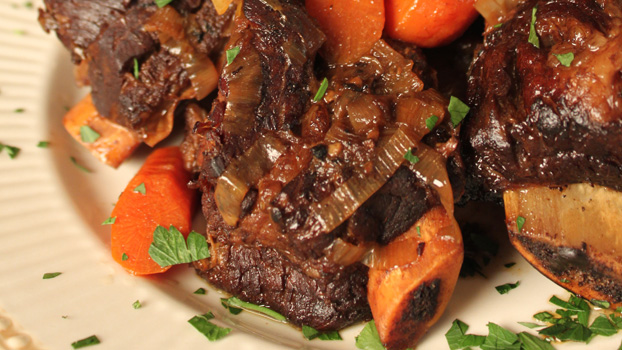 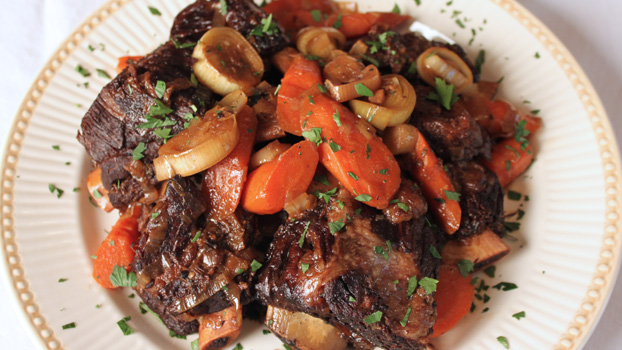 Braising is one of my favorite cooking methods… you brown your meats, and then slow cook them in lots of liquid. The meat gets so tender; it basically just falls off the bone. The meat picks up all the flavors from the vegetables and cooking liquid.

As I mentioned above, braising is a cooking method that uses both moist and dry heats. The meat is usually seared at a high temperature then finished in a covered deep pot or Dutch oven at a low temperature and usually partially covered with a liquid. This method is also sometimes referred to as pot roasting. The difference is usually based on the amount of liquids added. Braising for a long period of time with liquids breaks down the tough connective tissues, making this methods an ideal way to cook the traditionally tougher and less expensive cuts of meats. Both braising (like slow cooking in a crock-pot) and pressure cooking are both considered forms of braising. Braising is usually done in a pre-heated oven at 300 degrees F to 350 degrees F, but is can also be done in a crock pot on low for 5 to 6 hours, or on the top of the stove in a covered Dutch oven at medium-low heat for several hours. Be sure to check periodically and add more liquids if necessary.

Foods like vegetables that produce their own juices will typically only need a small amount of braising liquid. Braising liquids can vary from tomatoes, beer, wine, balsamic vinegar, soy, etc. and are usually used as liquid flavoring, usually along with a stock. When the meat is fork tender, the meat and veggies are usually removed, and the remaining liquid is usually finished into a sauce or gravy.

Belize, Bareboat Chartering on a Barrier Reef, the Blue Hole and Besties
A Magnificent Night at Sea – Leonids Meteor Shower