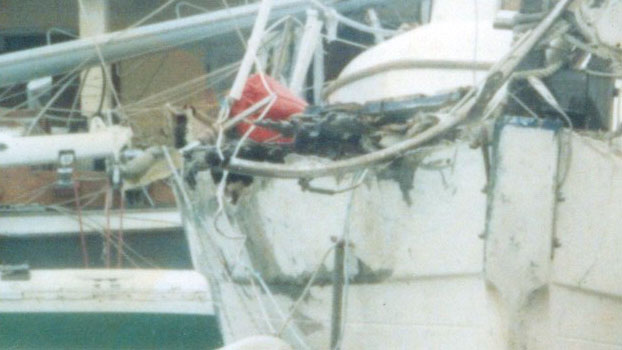 We arrived in Culebra with “Rhiannon” 1.5 days before the onset of the storm…

We worked feverishly that whole time preparing for a storm that would probably give us 60 to 80 knot winds with gusts up to a very unlikely 120 knots. We were as ready as we could be and had all of our anchors set out in a sweep so that we had holding at different points as the winds would clock around. As the onset of the storm was almost on top of us, a man pulled in with 2 racing sloops in tow, and within 40 minutes had both sloops anchored. One was just off our starboard bow. As he was about to put the other right on top of one of our anchors, we begged him not to anchor it there, he relented and dropped the other anchor just off our port stern. He then just left for shore without ever looking back. We knew his boats were the only boats that could potentially do us harm, but it was too late to move and start again. By then, there were approximately 300 boats in the harbor and mangrove inlets of Culebra.

“Rhiannon” rode the storm as we expected.

We were fine. All our anchors were holding. We had them all in the right places, etc. As the storm slowed down and intensified, we knew we were in for a rough night. About 4 am, a ham radio operator on the island told us that she had bad news. The storm had grown and was veering north and was headed right at us. We should expect a direct hit at approximately 6:30 to 7 am that morning. We put our life jackets on the table and prepared a very small emergency “Go” bag to take with us if needed. It contained our passports, eyeglasses, a little cash, and my asthma meds and inhaler.

My Ex kept crawling forward on a life line tethered to the jack lines with his prescription dive mask on to protect his eyes to let out more scope and check for chafe. We were doing great so far. We were scared out of our wits, but feeling that we just might make it. Rhiannon was handling the storm beautifully. We had long since turned off our wind speed indicator. It had clocked out at 99 miles per hour somewhere around 3 am. Around 4:30 am and on, we started hearing “MayDay” reports consistently. What a hopeless feeling that was. Everyone would try to keep that other boat on the radio, and help talk them through, but inevitably all you could do was to note the name of the vessel and how many people were aboard and wish them luck.

At around 5:30 am, it was getting even rougher and we decided it was time to put on our lifejackets just in case. Everything that had never moved, even when we came across from Boston, started to fly all over the boat. Even the floor boards started popping up and down. The cabin floor was about a foot thick with all kinds of things that we were positive we had stowed securely.

At 6:30 am, my Ex made his last trip forward. As he checked our starboard anchors, he realized we had been cut because he got slack line coming up in his hands until he came up with the end that had been cut. The sloop that had been anchored off our starboard was no longer there. We then realized we had swung broadside to the wind and we were almost over on our side. As he fought his way back to the cockpit, he yelled to me to come topside as it was no long safe to stay below.

Please read next week’s installment of A Yacht Chef’s Old Hurricane Story to read what happens next.