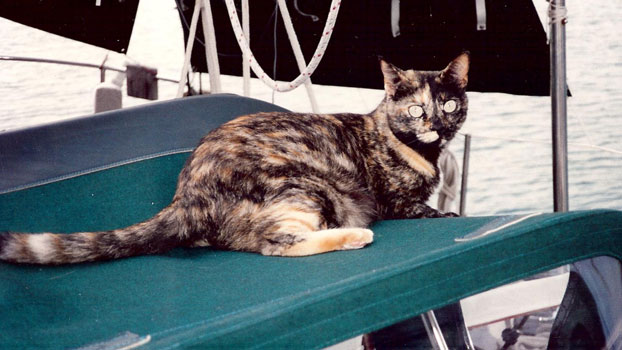 but we could no longer overpower the wind. We tried to turn Rhiannon around to run her up into the mangrove that used to be behind us but were now only a couple of trees jutting out of the water. We couldn’t break free, however, because our last holding anchor was still attached and dragging. Even with the anchor still attached and dragging, we were across the harbor is less than 3 minutes.

We ended up in a pile-up of 3 other boats (all of us ended up totaled) that were smashing against the patio of a very, very strong concrete home. We decided it was safest to stay with the boat for as long as possible, but each pound against the other boats almost threw us from the cockpit. We figured we were only about 20 yards from shore, but there was so much dangerous debris in the water, we hesitated to go for it. Finally, about a half hour later, my Ex spotted a 60 foot steel schooner bearing down on us, and we knew it was time to abandon ship.

…named Kaliloo (Kali) who was so scared, she was tucked into the further back bunk for most of this experience. As we were preparing to go overboard, I started to go below to get the cat and was told it was way to dangerous, so we steeled ourselves into having to leave her. Just as I was resigning myself to that fact, we took a really big crack to the stern and she flew up into the cockpit and jumped onto the cabin top just as a really big wave washed over us and the boat. I figured she was gone, but there she was with her claws dug into the teak cabin top. I scooped her up and Kali crawled into my life jacket and under my raincoat to get away from the wind and water. It took a little coaxing, but I managed to get her off my back and took some line out of a 5 gallon bucket on the cockpit floor that was miraculously still sitting there and I put Kali in the bucket and threw the line back in on top of her to keep her in and secure. She decided it was pretty safe and stayed put.

My Ex went over the stern rail first to see how deep it was. We didn’t realize until later when the storm surge abated, but Rhiannon was wedged on the edge of a sea wall and he landed in water only up to his chest. He said it was as OK as it was going to get, so I passed him the bucket with the cat and proceeded over the side next. As I crawled under the lifelines and tried to let go, my fowl weather jacket got caught on the rail, and the boat had swung out a little. By the time I had broken free and went into the water, I went in over my head. I went under, but popped right back up because of my life jacket. Another big wave picked me up and then deposited me on the sea wall in water a little over my waist. But there was a problem; the wave had also picked up Rhiannon and the boat was bearing down on me fast. My Ex kept urging me to come faster, but the debris had closed up in front of me and I couldn’t seem to push through it. He was getting more urgently persistent that I find a way to push through it, so without looking back, I started to literally crawl over the debris of sides of broken boats, houses, galvanized roof sheeting, fences, trees, etc. I never looked back, but I was told the boat just missed me by a couple of feet.

Please read next week’s installment of A Yacht Chef’s Old Hurricane Story to read what happens next.