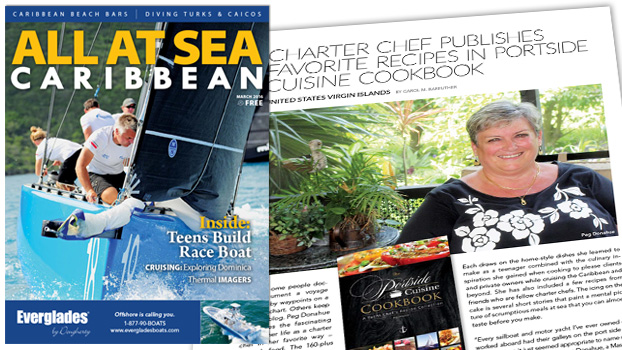 This a really nice article recently written about me and The Portside Cuisine Cookbook that was published in the March edition of the ALL AT SEA, an online magazine. I wanted to share it with you, and I hope you enjoy it! 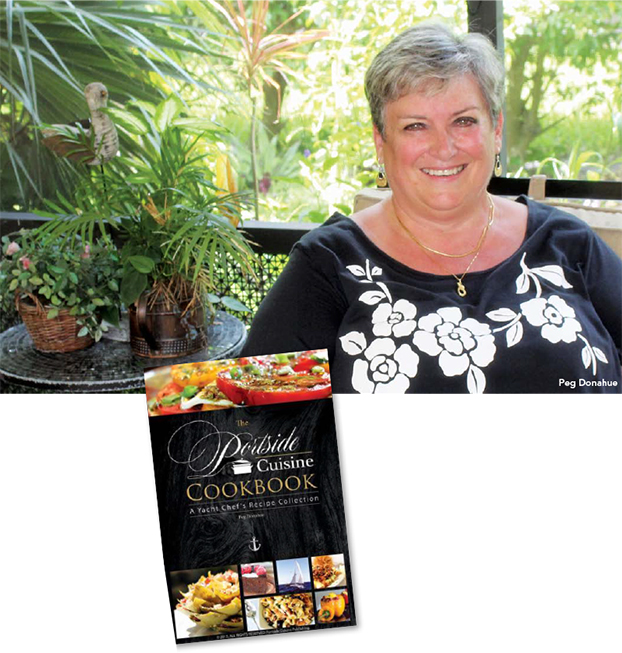 This article is written by Carol M. Bareuther, All At Sea Magazine
March 2016 Edition

Some people document a voyage by waypoints on a chart. Others keep a log or blog. Peg Donahue chronicles the fascinating days of her life as a charter chef in her favorite way – through food. The 160-plus recipes in Donahue’s newly-released cookbook, The Portside Cuisine Cookbook: A Yacht Chef’s Recipe Collection, are all delicious originals.

Each draws on the home-style dishes she learned to make as a teenager combined with the culinary inspiration she gained when cooking to please clients and private owners while cruising the Caribbean and beyond. She has also included a few recipes from friends who are fellow charter chefs. The icing on the cake is several short stories that paint a mental picture of scrumptious meals at sea that you can almost taste before you make. “Every sailboat and motor yacht I’ve ever owned or worked aboard had their galleys on the port side of the vessel, so it just seemed appropriate to name my cookbook Portside Cuisine,” says Donahue, a Massachusetts native who learned to cook from her Italian grandmother and mother using fresh ingredients from the family’s garden.

In the late 1980s, Donahue sailed to St. Thomas aboard a Hans Christian 33. A few years later, she was living at anchor in Elephant Bay, St. Thomas, surrounded by many other boats full of yacht crews. Social life meant yacht hopping at night and enjoying fantastic dinners. Donohue loved trying out new recipes on this group and, after a while, they encouraged her to become a charter chef. She did and worked her culinary artistry aboard several yachts and met a lot of interesting people along the way ranging from movie stars, high profile politicians, writers and scientists to everyday people from all over the world. Donahue retired after an eight-year yachting career to care for her ailing mother. It was during this time, in order to “keep her fingers in the cookie jar” as she says, that she decided to share her experiences and love of good food by writing a cookbook.

The recipe collection in Portside Cuisine includes Italian, French, Asian, Mexican, Northern African and, of course, Caribbean cuisines. Meat lovers will find favorites such as roast beef tenderloin with a Caesar crust, Mom’s meatloaf and meatballs and Braised Asian Short Ribs. There’s something for vegetarians too like Heirloom Tomato and Mozzarella Tart, Wild Rice and Cranberry Salad, and Veggie and Red Lentil Burger. “One fun story happened when we were at the dock in Puerto Rico on the yacht owned by the owner of a large company,” says Donahue. “We weren’t expecting him, but his wife was at a meeting and he was at loose ends around dinner time. He surprised us and stopped by for a martini, but smelled supper cooking and hinted that he was hungry and dinner smelled good. What could I say? I couldn’t turn the Boss away, so we invited him to join us in the eat-in galley. I made a simple pasta dish of ziti with Portobello mushroom, caramelized onion and goat cheese. He loved it, and asked me to make him a small ‘doggie bag’ to take home to his wife. Around 10pm that evening I got a call from his wife thanking me for sending her home such a delicious dinner and I had to promise to make it for her when she was next aboard. This recipe is in the Poultry chapter. It’s so mega satisfying to produce a wonderful meal and listen to the yums and aahs.” 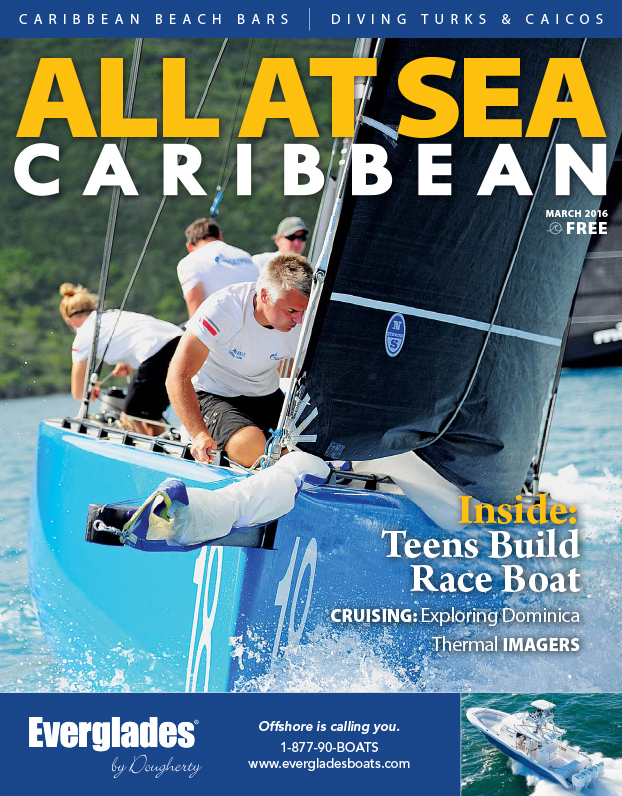 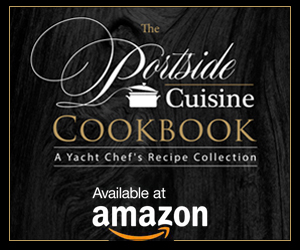 The cookbook is available on Amazon.