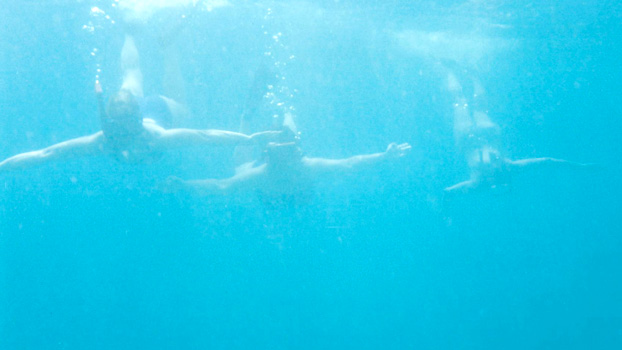 In the 80’s, before I moved to the U.S. Virgin Islands, we used to do a bareboat charter every Winter to get away from the Northeast winters. One year we chartered a sailboat in Belize (located in Central America on the Caribbean Sea and bordered by both Mexico and Guatemala) and cruised for 10 days up and down the coast and its barrier reef and its cayes and atolls. It was quite an adventure. We flew into Belize City and picked up our chartered sailboat called “Windy Sue”.

We traveled from caye to atoll and spent out nights anchored off one of these isolated spots. There were days when we wouldn’t see another soul and had the whole area to ourselves. We’d fish, snorkel, and explore. Sometimes, when we were anchored off a beach and not in the mangroves, we would make a fire and cook ashore. We used to bring a cooler loaded with food, meats, and dry ice with us because the ability to shop was very limited. I used to make a big batch of spaghetti sauce with my Mom’s Meatballs recipe, and bring a huge frozen batch with us. I’ll never forget having a spaghetti and meatballs dinner on the beach in the middle of nowhere along with a couple of bottles of red wine! The remembered stories and jokes make me smile still. Please see Mom’s Meatball recipe already published on www.portsidecuisine.com. 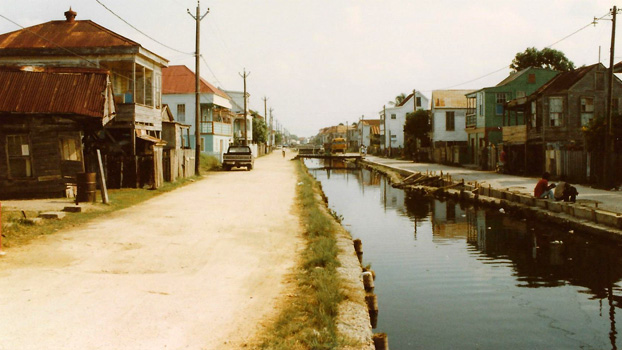 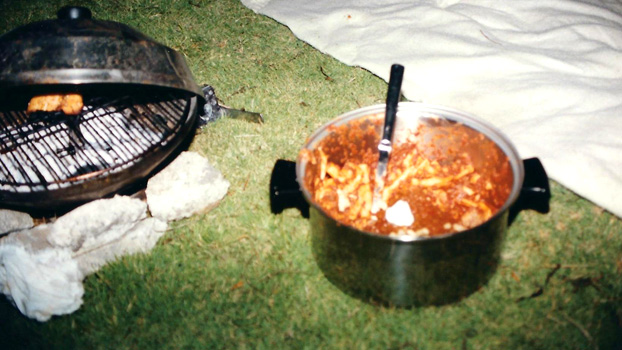 We also got pretty lost and disoriented a couple of times, and we actually stopped at an atoll with just one little shack on it. We ended up trading a pack of cigarettes for directions! We had endured a harrowing afternoon that day idling our way through a very shallow area loaded with coral heads. Dan had to hang over the bow and scream LEFT !!! , RIGHT !!! at us all afternoon while we slowly picked our way out. It’s not like you can back out once you’ve worked your way in! Once we actually got stuck… we had to wait a bit for the tide to come up and the guys had to get in the dinghy and haul us sideways to break us free again! 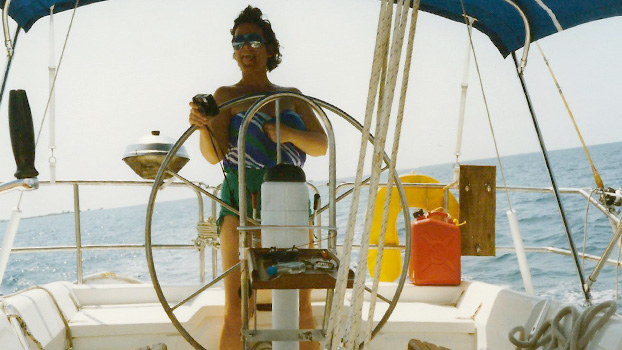 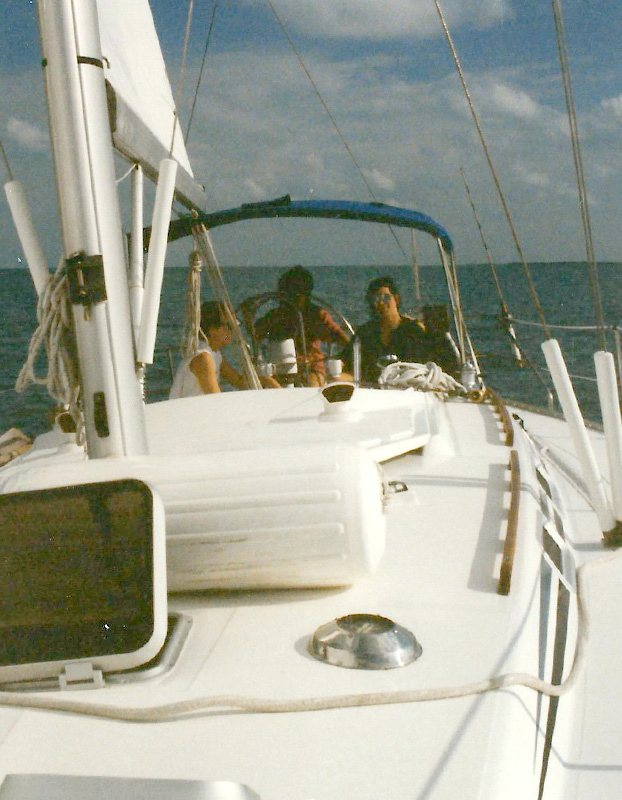 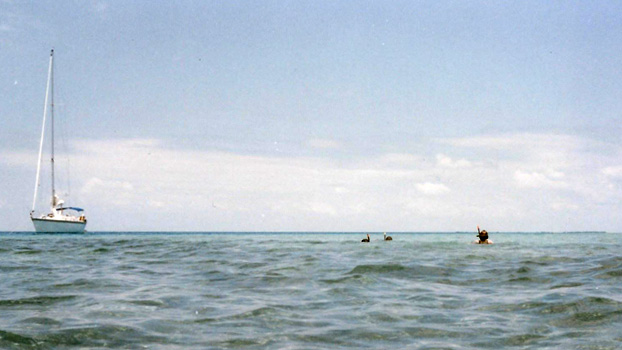 One afternoon, I remember we were all snorkeling on the reef one day except Frankie, who wasn’t a great swimmer but loved to fish, so he was close by with the dinghy fishing. All of a sudden, he turned off the engine for safety and drifted up close to us and quietly mentioned there were some reef sharks over on the next ledge from us. Well, you never saw 3 girls scramble into a dinghy so fast. We virtually flew! The guys were on another reef farther away, and we couldn’t all fit into the dinghy at one time, so Frankie took us back to the Windy Sue, and puttered off to pick up the guys. They were totally oblivious to us waving our arms and jumping up and down like maniacs, and calmly snorkeled their way back to the boat. We could see the shadows of the sharks off a ways, and kept trying to get them to hurry up. They finally got aboard without incident, and were shocked when we pointed out the shadows now not so far off! Thankfully, this incident happened near the end of our trip, because we were all just a little wary when we were in the in the beautiful warm waters. I’m not sure we would have been so comfortable and clueless had this happened when we’d first arrived! 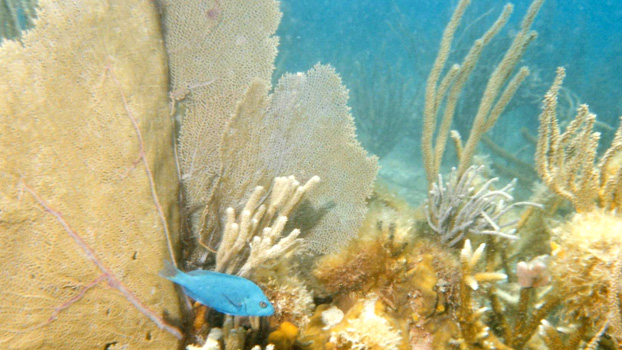 Another evening, we anchored off a town named Placencia between the town and an atoll for the night. We were excited to be in civilization again, so we all got dressed up and decided we’d go into town for dinner! 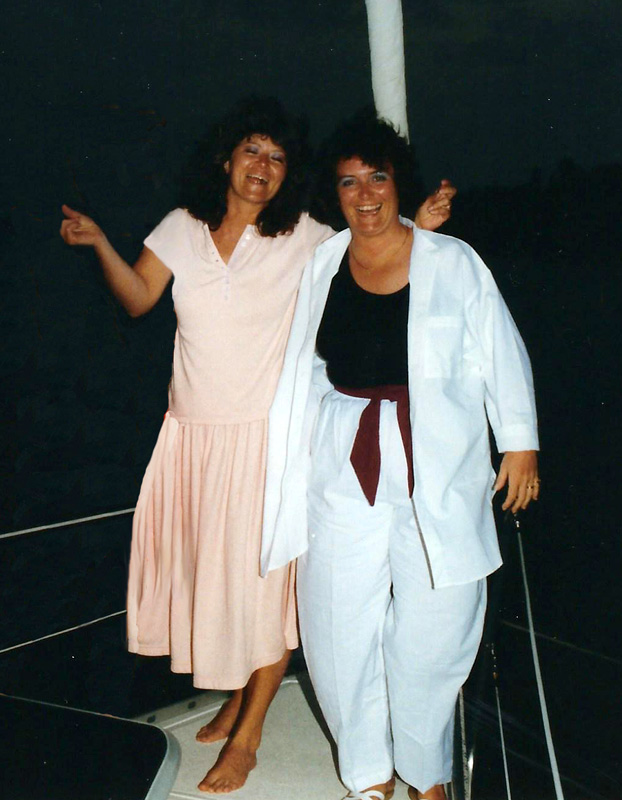 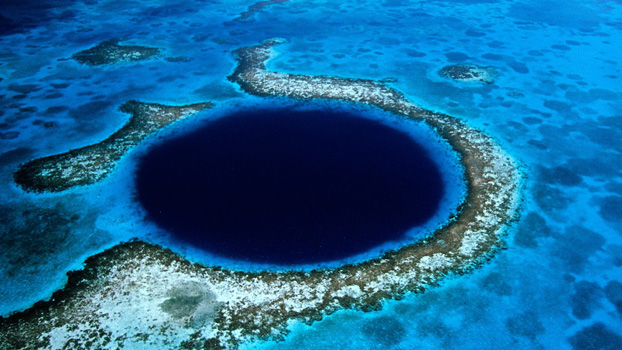 We had to go in the dinghy in small groups, so Pam and I were brought in and dropped off first while Danny went back out to pick up the next group. Pam and I started to walk around a bit and spotted a group of men sitting on these barrels or low stools and they were just watching us. It was a little unnerving. As we were waiting, we spotted these big shells lying in a heap and when we got closer to them, we realized that they were cleaned out and discarded turtle shells. That sort of freaked us out. Now this group of men started heading over to us, and being the couple of weenies we are and our active imaginations started working overtime and we started to worry. We also couldn’t see our dinghy anymore because it was starting to get dark, so we were feeling a bit vulnerable. We started casually backing up and heading out on this rickety dock, and realized too late that we had backed ourselves into a corner. If the men kept advancing towards us, our only option now would be to jump into what our imaginations had us thinking were shark infested waters! It turns out that they were very friendly and curious about the Americano visitors. They wanted to tell us about their town and ask us about our vacation. We had a bit of a language barrier, but when Danny arrived back, he was able to talk to them because Dan speaks fluent Spanish. They ended up showing us where to go to have something to eat. The town was all on stilts and had concrete sidewalks as their “streets”. We laughed at ourselves for getting all dressed up for a night on the town. We were way overdressed for this excursion! We ended up in this little shack and had conch fritters, turtle soup and seaweed shakes. 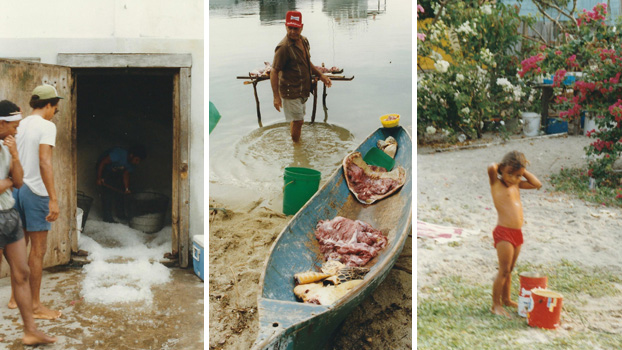 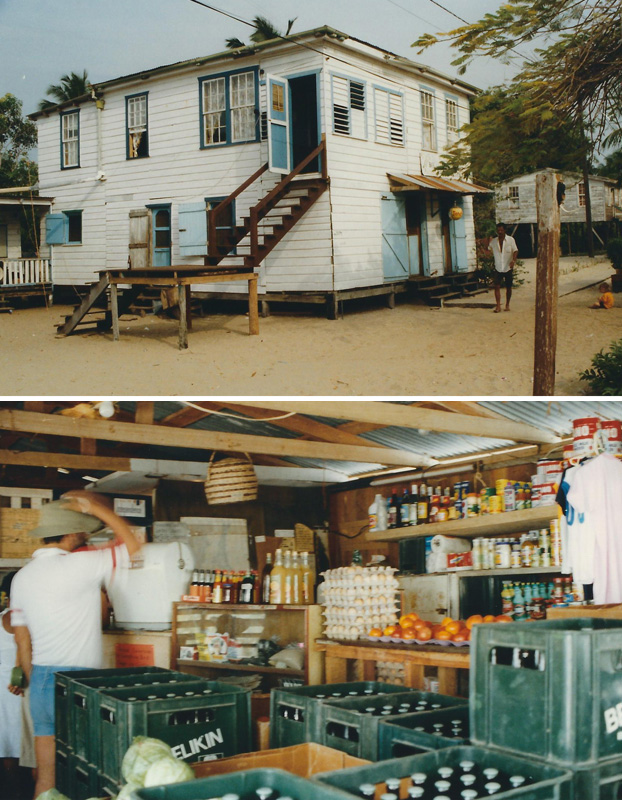 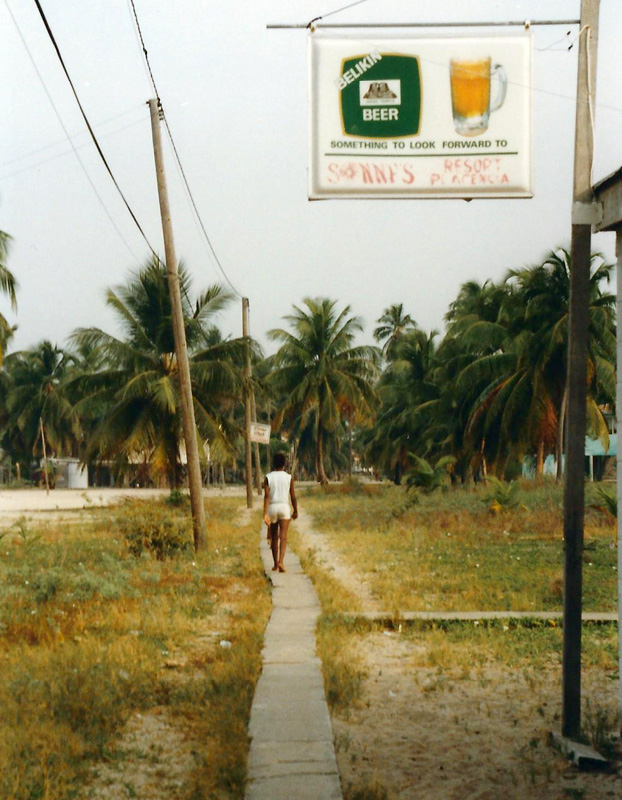 We also took a very interesting day trip at the end of our trip to see these supposedly infamous waterfalls. It was literally a 12 hour day in a dusty van with no A/C, and we are pretty sure he took us to the wrong waterfall, because we couldn’t get anywhere close, and were only able to spot it through the forest from about half a mile away! But that was fine, because we also visited a Mayan ruins about 80 miles west of Belize City called Xunantunich which we got to by using a pulley bridge to get across the Mopan River, experienced these gigantic trees with bat caves in them, the Belize Zoo, the city of Belmopan, which was constructed to be the new capital city, but no one wanted to move to it, so it was pretty much abandoned at the time we visited, and some very beautiful jungle and rain forest areas. 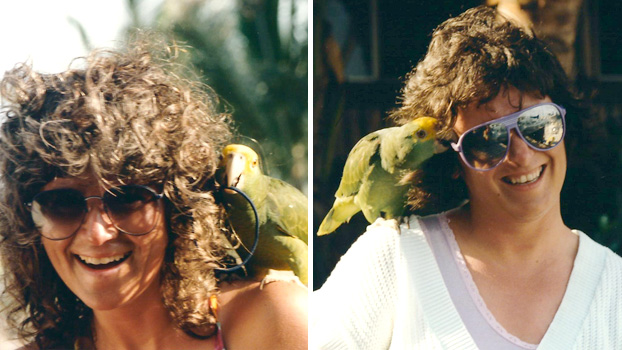 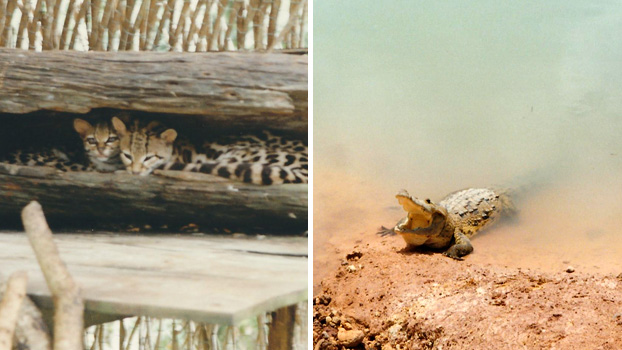 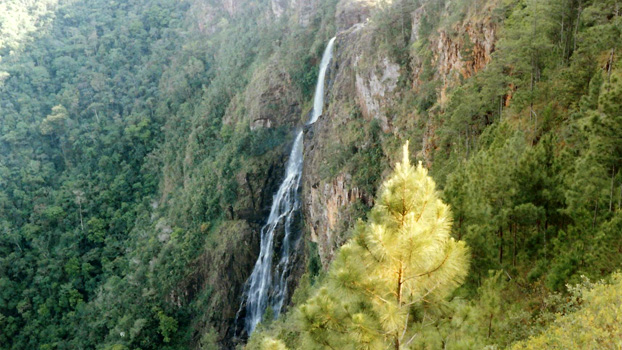 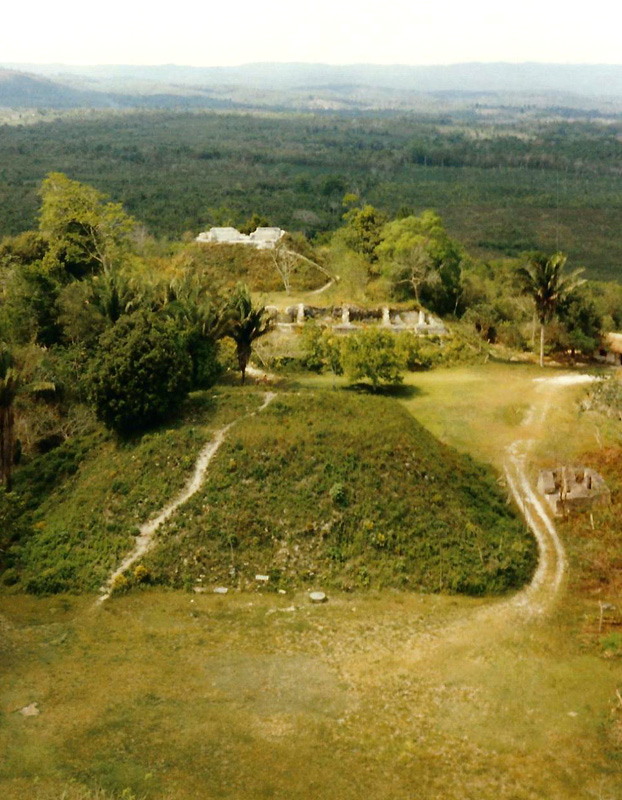 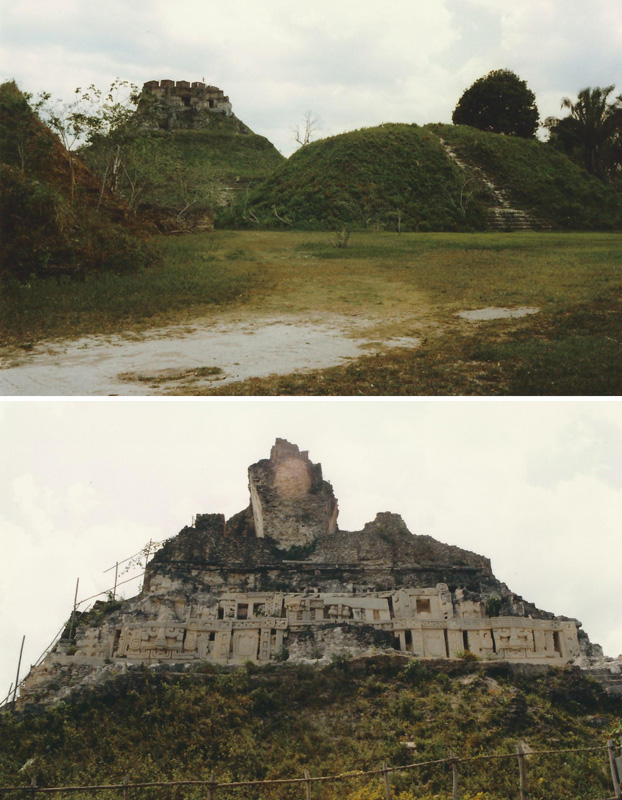 Oh, and a short side story… When poor Pam and Dan returned home, they were met with a rude awakening that their Belize adventure was indeed over. They arrived home to a backed up laundry and septic system that Dan had to immediately dig up… messy, stinky and not fun!

Belize has come a long way since the mid-1980’s with its tourism. We loved it then, and it was very rustic. If you’re adventurous, I definitely recommend you give Belize and bareboat chartering a try! If you’re not comfortable with running your own boat, they also offer chartered cruises. It was quite an adventure and I’m sure you’d love it as much as we did! 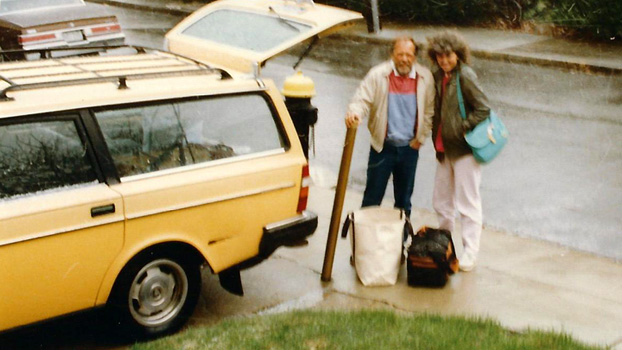 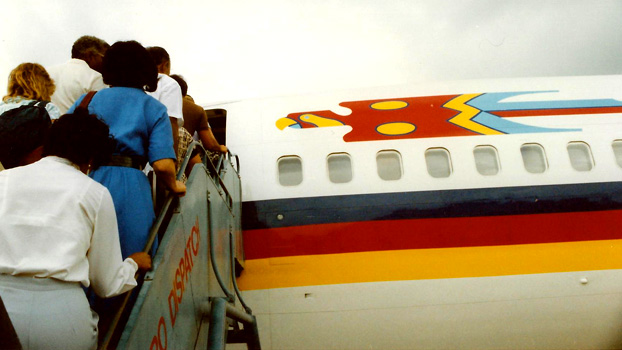