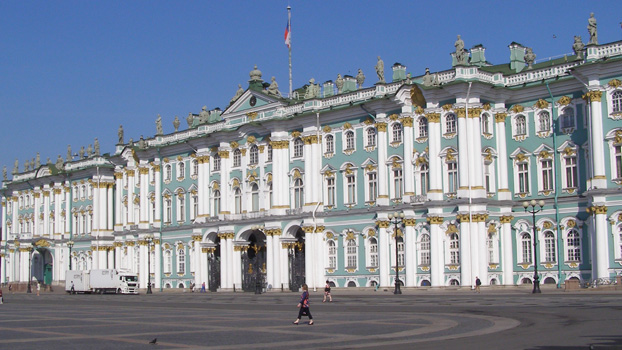 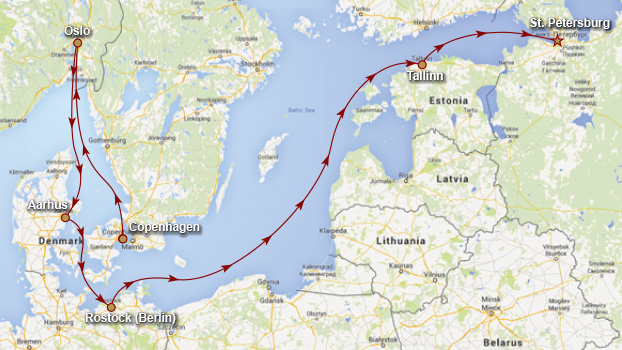 Our day started with a 5 am wake up call. We were to assemble for our excursion at 6:15 am. It was going to be a long day. We had a quick breakfast in our cabin, and headed off to our designated assembly area. We were promptly escorted off the ship and to the lines at passport control where we passed through a mandatory checkpoint every time we left and returned to the ship during our stay in St. Petersburg. Russia had, by far, the strictest controls at the port. We happily made it through without incident and hopped on our designated tour bus.

What a fantastic day it was turning out to be for our first time in St. Petersburg. It was sunny and the temperature was forecast to be in the mid 70’s. We had the most outstanding tour guide, Leo, who was exceptionally intelligent, prepared and well connected. He was equipped with headsets for everyone, which we all appreciated. He thoroughly entertained us with his wit and political views during our ride through the city.

We started the day with a 45 minute drive to Peterhof and the parks and palaces of Pushkin, formerly known as Tsarskoye Selo. Pushkin is a municipal town in the southern suburbs of St. Petersburg, named after the famous Russian poet Alexander Pushkin. Built in 1710 by Peter the Great, the luxurious Imperial Palace of Peterhof and its estates, known as “The Russian Versailles”, overlooks the shores of the Gulf of Finland. The parks contain numerous fountains, statues, pavilions, romantic gardens, and walking paths. The fountains in particular operate without the use of pumps. Water is collected in the Upper Gardens and there is enough pressure from the difference in elevation to drive the fountains throughout the complex.

One of Pushkin’s most impressive and famous spots is the majestic baroque Catherine Palace where the Empress Catherine the Great lived. The palace, designed by Italian architect, Francesco Bartolomeo Rastrelli, who spent most of his career in Russia, is one of the most decorative and opulent buildings in the city. Destroyed by the Nazis during World War II, it has been painstakingly restored to its original grandeur.

The Grand Palace lies at the heart of Peterhof.
The Peterhof Museum Complex 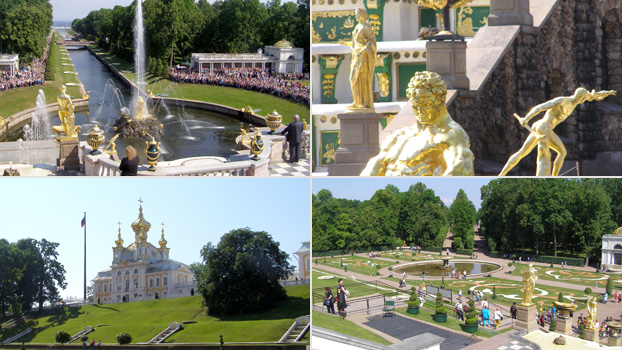 The Grand Cascade and Samson Fountain.
Peterhof is recognized as a UNESCO World Heritage Site. 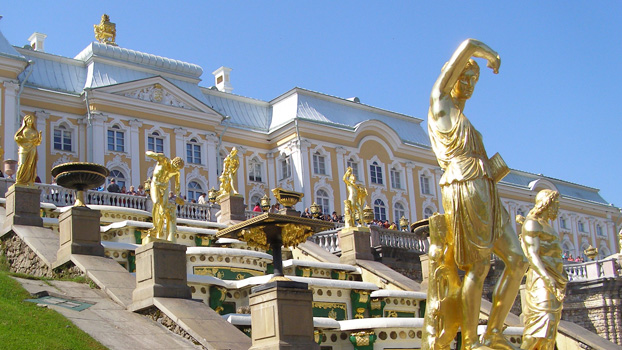 The gilded figures of the Grand Cascade.

Next, we visited the Yusupov Palace, famous for being the site of Grigori Rasputin’s murder on 30 December 1916. Rasputin was a friend, mystic and advisor to Nicholas II and his family, but the Romanov Monarchy thought he had too much influence over Nicholas II and his wife, Empress Alexandra Fyodorovna. He was also viewed to be the cause of Russia’s bane during World War I. He was assassinated, some say by cyanide-laced wine, by Prince Felix Yusapov. The story goes Prince Felix Yusupov attempted to poison him at dinner in the wine cellar then shot him. The prince left him presumed dead. Rasputin realized his predicament and attempted to flee, but he was then shot by Vladimir Purshkevich, a politician and nationalist, who also acknowledged Rasputin as a threat to the empire and agreed to participate in his murder. The story and rumors are many and it is a fascinating story. 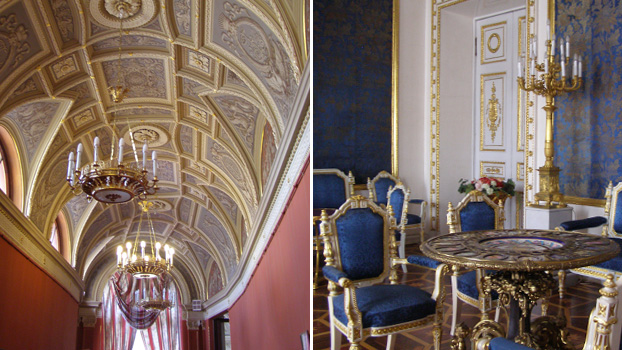 Ceiling frescos and the blue room at Yusupov Palace. 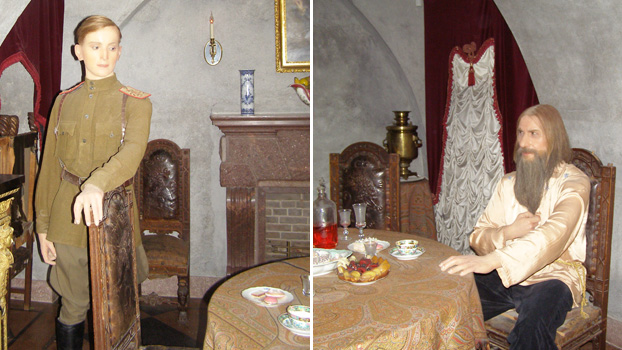 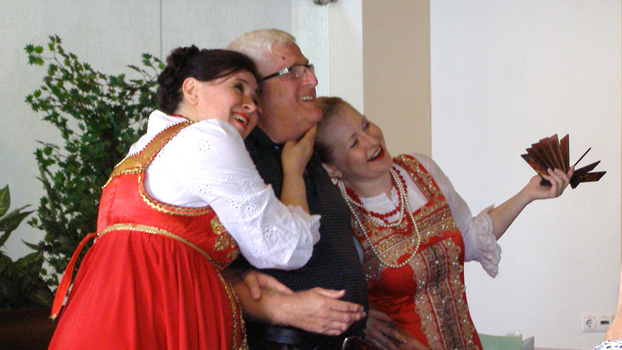 We then went to a luncheon and were entertained by two singers and an accordionist who sang traditional Russian folk music. They were lively and we had a lot of interactive fun. Our lunch consisted of:

Our final stop for Day 1 was St. Isaac’s Cathedral. This cathedral is the largest Russian Orthodox cathedral in the city, and the fourth largest cathedral in the world. It is dedicated to St. Isaac of Dalmatia, who was Peter the Great’s patron saint. The cathedral took 40 years to construct under the architect August de Montferrand’s direction, from 1818 to 1858. 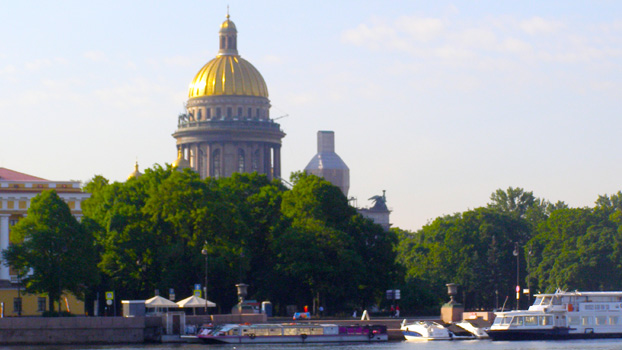 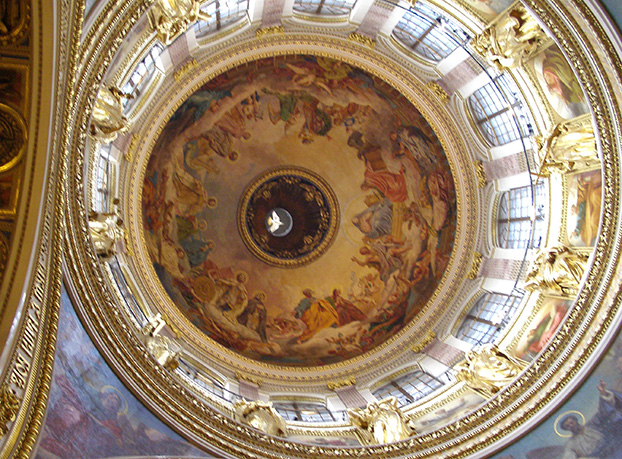 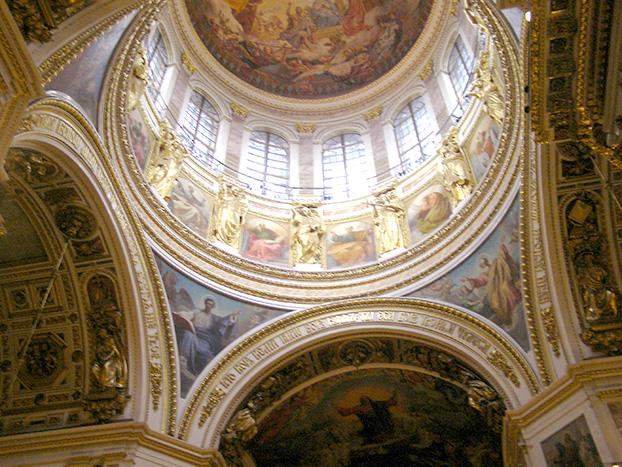 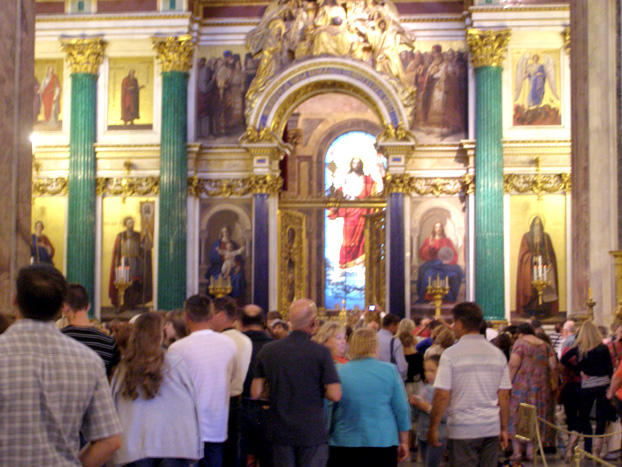 The interior of Saint Isaac’s Cathedral.

We then returned to the ship, quickly showered and changed for our evening out at Catherine’s Palace. Back with Leo on the tour bus, he lectured while we took the hour-long ride to the palace for our exclusive Princess Cruise evening of tours and festivities.

We arrived at the palace gates and were led into the lawns and grand entrance to the reception where we were met with champagne, vodka and hors d’oeuvres. It was a gorgeous, clear evening. Leo led us inside as we were greeted and accompanied by the Royal Guard Marching Band. We entered and ascended the grand staircase and took our individual tours. We passed through the Great Hall, the Light Gallery, the first, second and third anterooms, the Picture Hall, several dining rooms, and then into the legendary Amber Room. The room is spectacular and took my breath away. The amber mosaics were given as a gift to Peter the Great from Frederick William I of Prussia in 1716. He was, in turn, presented with a small ship, 55 grenadiers for the royal regiment of giant soldiers, a lathe, and an ivory goblet the Emperor Peter spun himself. Rastrelli, the Italian designer, created the extraordinary Amber Room by combining mirror pilasters, painted frieze, and many carved and guided ornaments created by Florentine and Russian craftsmen. The mosaics were formed into four pictures depicting allegories of the “five human senses”. In 1941 when the Nazis took Tsarskoe Selo, the Amber Room was dismantled in less than two days and the panels were crated and shipped away to Königsberg, Germany. The panels and gilded doors were exhibited in one of the halls of the Königsberg Castle through 1942, but were dismantled again in 1944 when the Germans retreated. They haven’t been seen since. According to Wikipedia, the Amber Room was considered the “8th Wonder of the World” before it was lost.

In 1982, recreation of the Amber Room began. It took over 20 years to complete and cost 20 million USD. 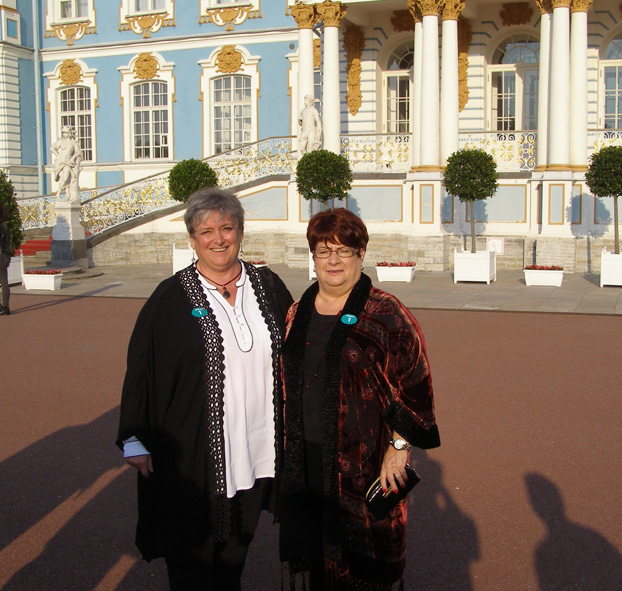 Peg and Dianne at the Catherine Palace. 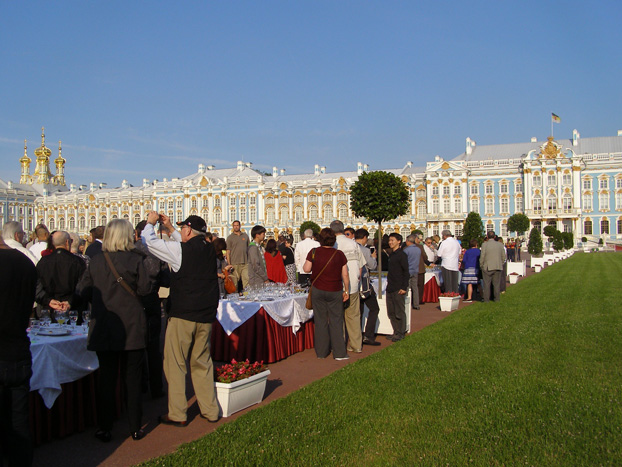 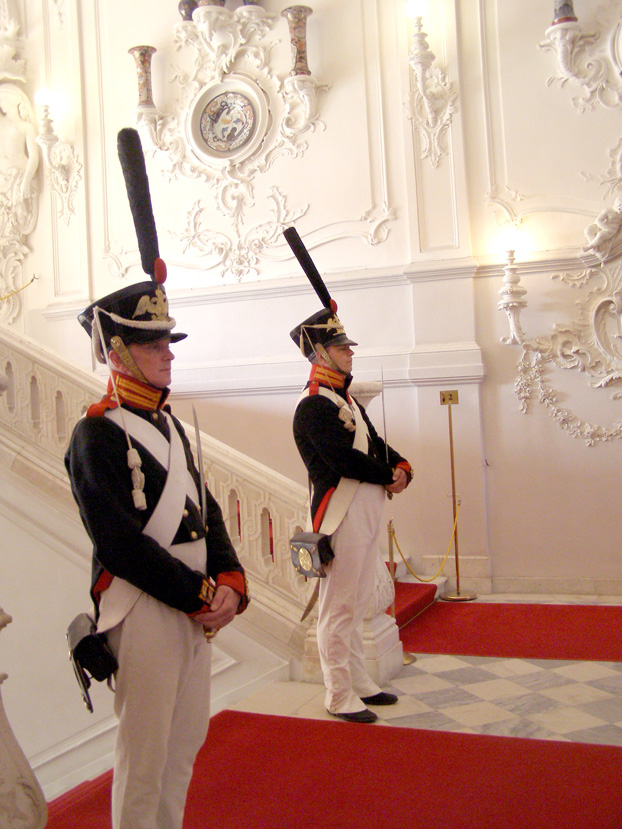 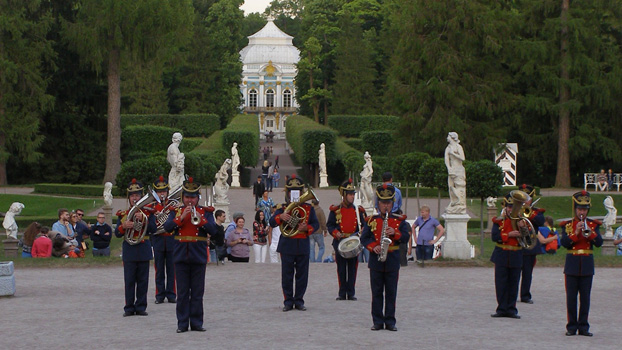 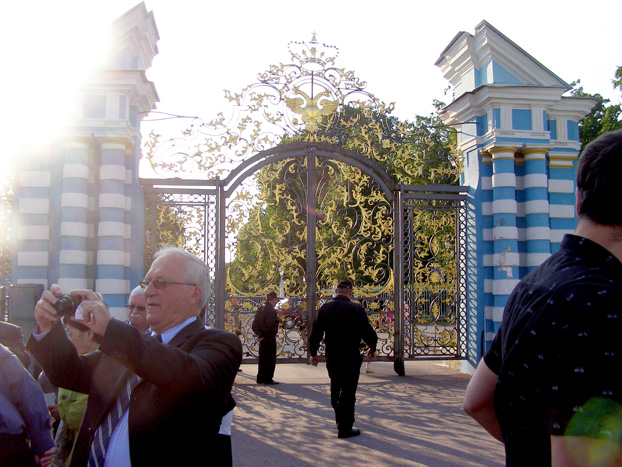 We were lead to the Picture Hall and seated for a concert and a visit by Catherine herself, and then some period dancing. It was a spectacular performance. After that, we were escorted to what used to be one of the main kitchens, which has since been restored to a dining hall. We had a magnificent dinner followed by a gathering in the gardens and more dancing demonstrations. After a walk through the carriage house, we were back to our buses around 11:30 pm. 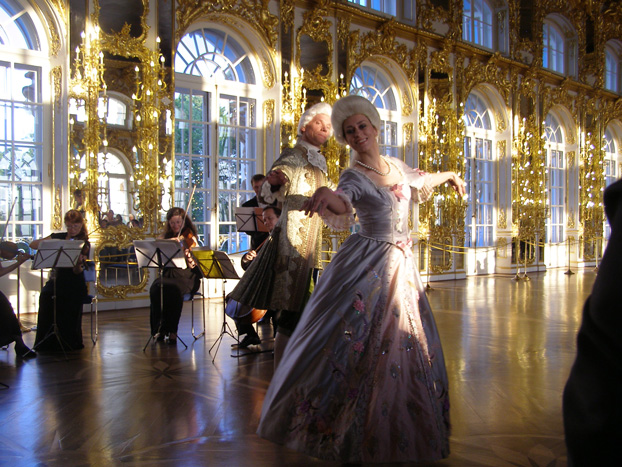 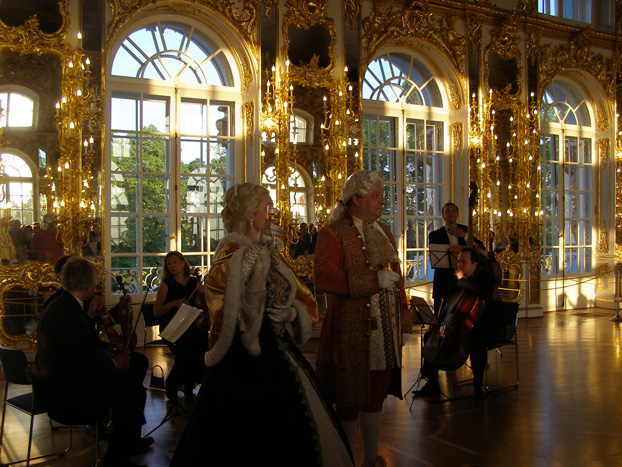 We were back on the bus again by 7 a.m. with Leo, who was just as sleepy as the rest of us. We started off with a canal cruise along the Fontanka River, the Moika River, and the Neva River in an open-air boat, which allowed us to enjoy many of St. Petersburg’s gorgeous bridges.

After the canal cruise, we walked directly across the street and entered the world famous Hermitage Museum. This museum was packed with tour groups, but did not detract from what we saw on our 2.5 hour tour in the least. We saw many works of art, including an original piece by Leonardo da Vinci. Leo kept our tour specifically targeted to the historic and political lectures. 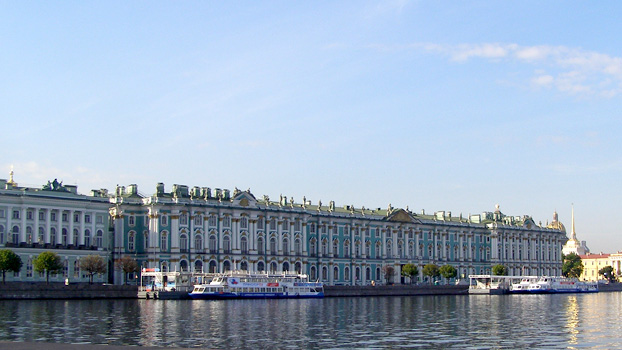 The State Hermitage Museum is one of the largest and oldest museums in the world. It was founded in 1764 by Catherine the Great. 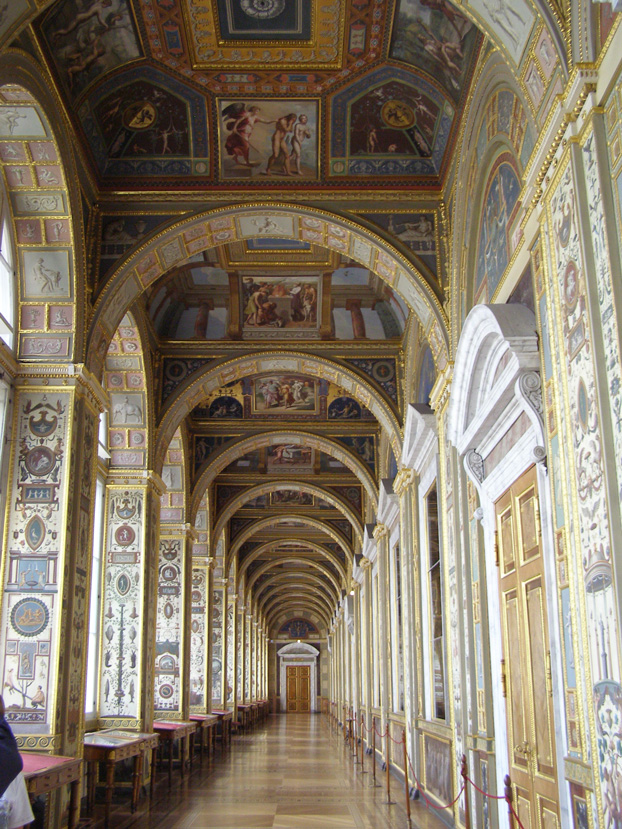 Halls of The State Hermitage Museum 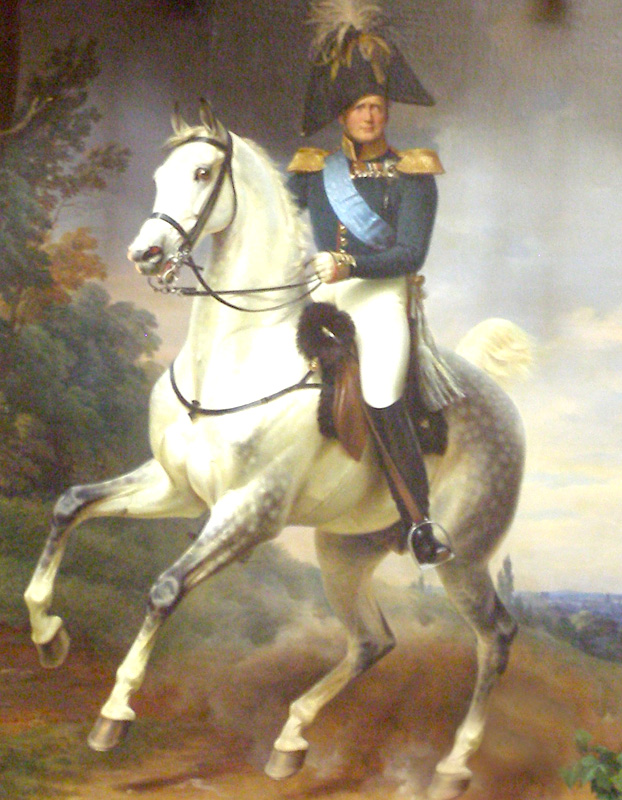 We then stopped for lunch in a palace with several other Princess tour groups. Our lunch consisted of:

After lunch we visited the Church of the Savior on Spilled Blood. This church was built on the site Alexander II was fatally wounded by a grenade in March 1881 as his carriage was passing along the embankment of the canal. The construction of this church was funded by the Imperial family and was completed in 1907. The churches spires are topped with the magnificent “onion domes”, which are predominant in Russian architecture. 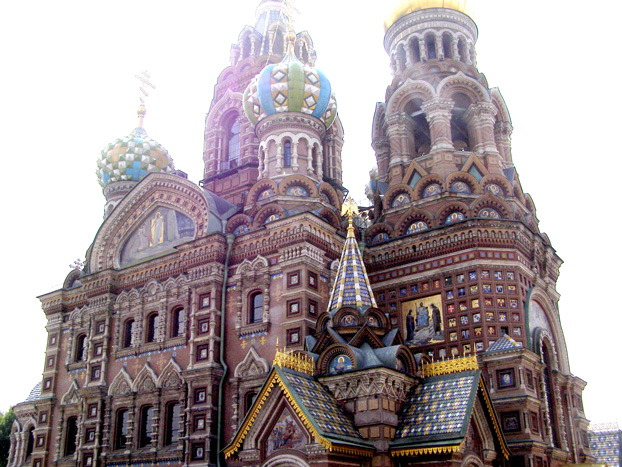 Church of the Resurrection of Jesus Christ is known as the Church of the Savior on the Spilled Blood to locals. 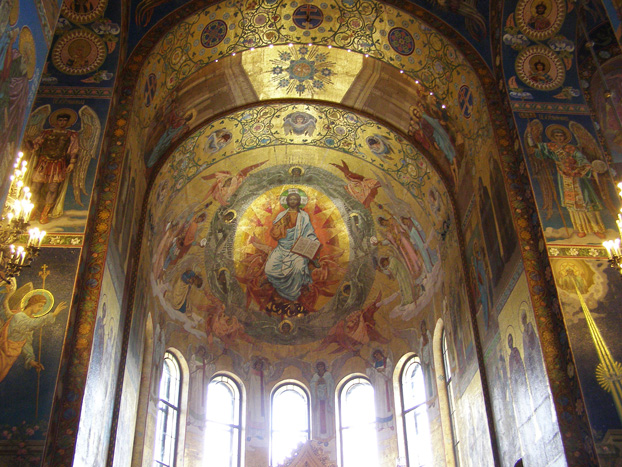 The construction of the church was almost entirely funded by the Imperial family and thousands of private donators. 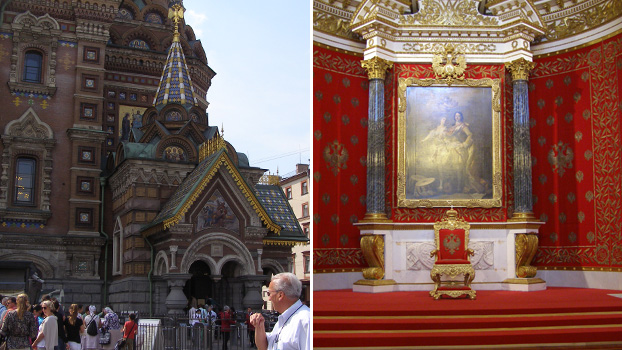 The Church of Our Savior on Spilled Blood was built on the spot where Emperor Alexander II was assassinated in March 1881. 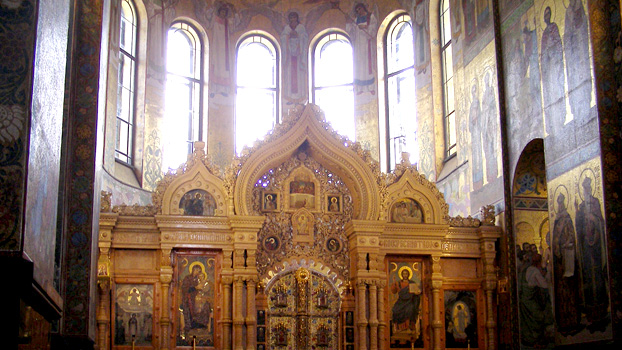 The interior and exterior of the church is decorated with detailed mosaics. The church was closed for services in the 1930s when the Bolsheviks destroyed churches all over the country. It reopened in late August 1997 after almost 30 years of restoration.

We finished off with a tour of the Peter and Paul Fortress. Dianne and I cut this last stop short. The lines were long, and my wrapped knee was crying out to me ENOUGH! So, I don’t really have any great insights on this one. 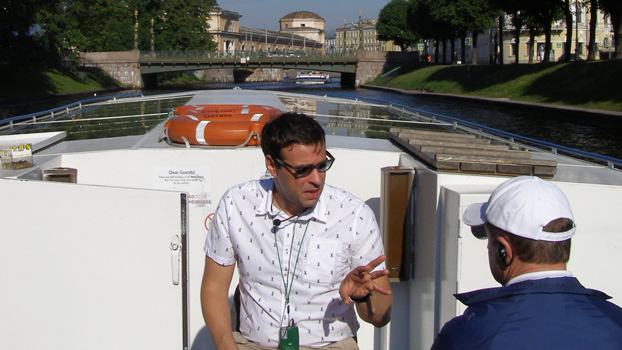 We were returned to our ship and gave Leo huge hugs and wished him well. We will miss our most excellent tour guide.

We were returning to an exceptional treat aboard the Regal Princess that evening. We were scheduled to attend the exclusive Chef’s Table Lumière. I hope you treat yourself one day to a Princess Cruise, and please make sure you book a reservation for this special treat.

Please keep tuned in… There’s just a few more days left to discuss! Until then, I’ve included a few interesting reads on Russia and its deep history.