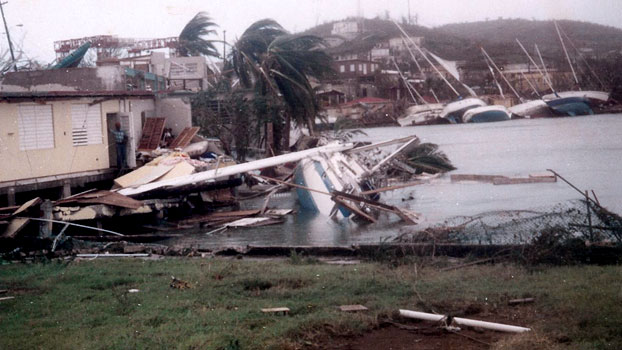 We were so happy to be alive and on land, that we stood on the road and just looked around…

I can’t even describe what I saw. We knew we had to get to higher ground because trees, pieces of houses, roofs, even conch shells were just whizzing by over our heads. We spotted a concrete building up on a hill and decided to head for that, but we had to head into the wind so that we could see what kinds of flying missiles were heading for us. It took us about 20 minutes to go the 100 yards up the hill. We made our way around the building to the left side and tried to get in a locked door. No luck. We decided to just sit there protected from the wind and flying debris until the eye passed and then try to find a way indoors somewhere. It turns out we were sitting on the back doorstep of a pharmaceutical plant that was operating as one of the shelters. The Civil Defense must have heard us pounding on the door because they opened it and pulled us inside. They rushed me into the infirmary to doctor up my legs that were all cut up, wrapped us both up in warm blankets and then a Medic gave me a tetanus shot. They were pretty well stocked and prepared for medical emergencies!

Then the shock set in. We were now homeless and what seemed like a lifetime away from everything and everybody we knew in St. Thomas. After the storm passed, we were moved to a better shelter with lots of cots and blankets with about 150 other people and boaters who had lost their homes. We were eating emergency rations, standing in lines for a small ration of cooked rice and beans, and thankful for having survived and the welcome and care from the Civil Defense of Puerto Rico.

There was no way to get communications out to St. Thomas, never mind to the States. We were not able to even let our families know we were OK for about 4 days until we found someone with a hand radio that was willing to help us reach a friend in the States who could contact our families for us. We had no idea how many boats were still floating, how many dead there were – information was very hard to come by. Culebra had been leveled, destroying about 90% of the island.

Despite the fact that Culebra is where I had the most terrifying time in my life and where I lost my home aboard Rhiannon, I can’t say enough about the people of this island. Despite all their losses, they opened their hearts and homes (or what remained of them) to the “boatees” and did everything in their power to help us. I can’t think of a better place to have survived a major disaster. It was a complete reversal of what we heard was happening in St. Croix and St. Thomas. There was no looting, we all formed joint committees to help clear the debris from their streets, and from in front of their homes. I could continue on for at least another couple of paragraphs, but I won’t bore you more than I already have!

Please read the final installment of A Yacht Chef’s Old Hurricane Story in my next post.