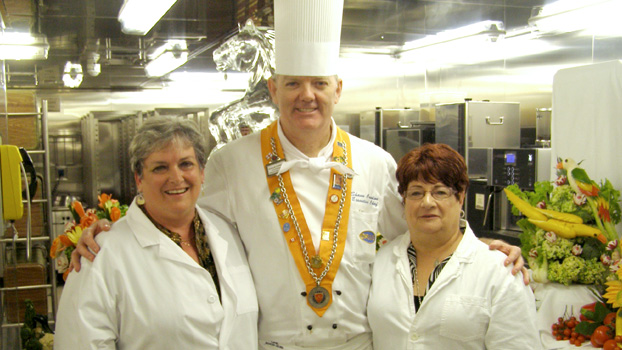 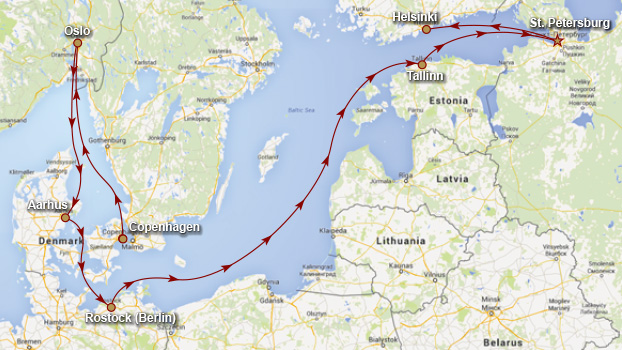 On our way to Helinski, Finland 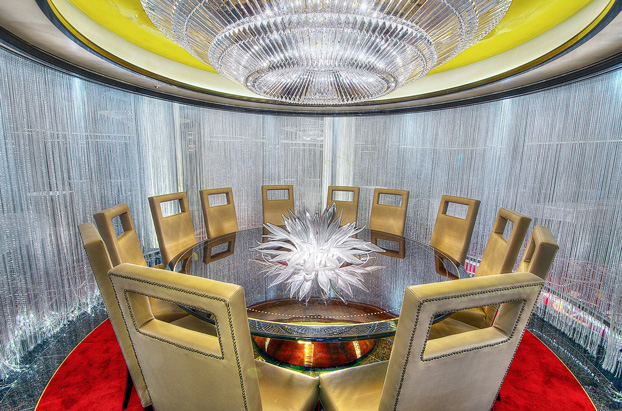 After the last two hectic days in St. Petersburg, the last thing I thought I wanted to do was go to the fancy Chef’s Table Lumiere exclusive dinner event on the evening we were leaving Russia. I was exhausted and my feet ached. I am so happy Dianne and I persevered. This was the particular evening I had been looking forward to this whole cruise…

We started the evening by meeting in a lounge near the kitchens. We were greeted with our own chef’s jackets, and then escorted into the galley (kitchen). It was the length of a football field and everything was sparkling and spotless stainless steel and there were so many people in white jackets working that it was impossible to count.

We were led to a back corner, given a glass of champagne, and the Regal Princess’ Executive Chef, Shaun Candon, came over to greet us, and we had a toast to a wonderful evening. We were given many hors d’oeuvres in the galley while chef explained a bit about how everyone works efficiently and what we could expect from that evening’s special dinner. The many hors d’oeuvres were all spectacular. There was a whole display of fruit and vegetable art. The creativity was mind-boggling and gorgeous. The ship’s photographer took photos, and we were given those photos at the end of the evening. 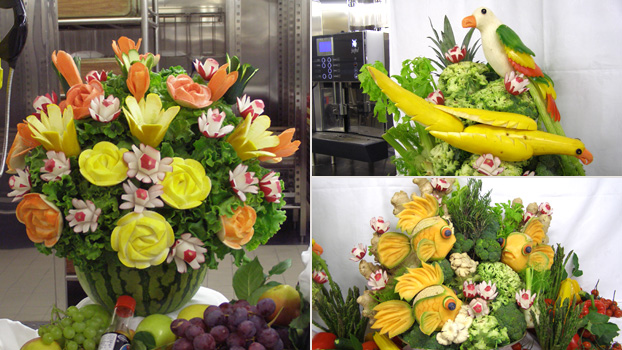 Our chef’s jackets were discarded, and we were then taken to the Chef’s Table Lumiere and seated at a round table for 12 guests. This table is situated in the middle of the second main dining room. The table was made of highly liquored wood with a mother of pearl inlay making a delicate circle around the table’s outer edge. In the middle of this huge table was a masterpiece of Murano glass that was backlit from below. Hence the Chef’s Table Lumiere. It was breathtaking. That was not however, where the shock and awe ended. After we were all seated, a circular curtain of Murano glass beads was electronically closed around our table and effectively made us a private dining room within the main dining room. This curtain was also illuminated from the tracks above and below, I believe. 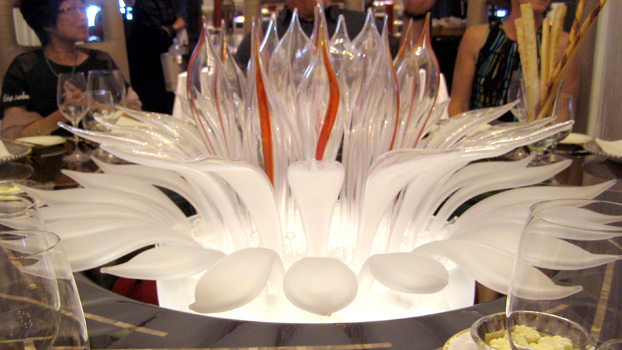 We were given another glass of champagne, and we toasted the evening and the spectacular dinner to come. The courses began with a flourish and they kept coming in a steady flow. Each was unique, artistic, and delicious. Each dish was also painstakingly described to us by either the executive chef or the maitre d’hôtel, Silvio Zampieri. Silvio is a show unto himself. He is a bit flamboyant, totally down to earth, and funny.

After coffee and Chef Candon’s homemade petits fours, we were given our own cookbooks as a gift, and we were able to get both chef’s and Silvio’s autographs on the menu keepsake and in the cookbook. It was an extraordinary evening and one I’ll always remember. 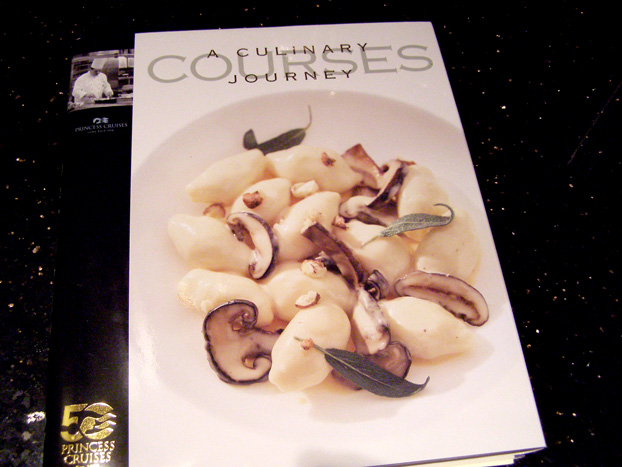 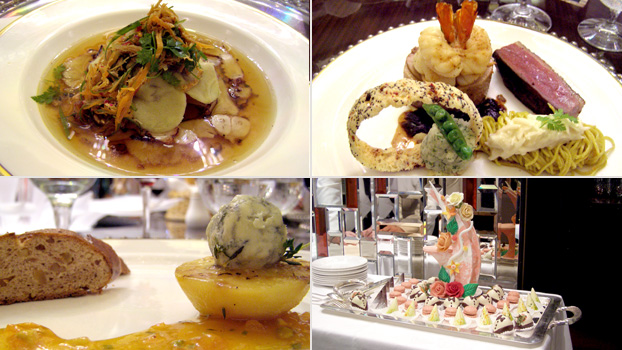 Dianne and I then watched Rhapsody and dancing in the Piazza, and I ordered the DVD collection as well as a DVD that held a photo collection taken by the ship’s photographers that would contain a compilation of 180 photos taken during our trip. We were to pick these up during our last evening aboard when the DVD would be finalized. 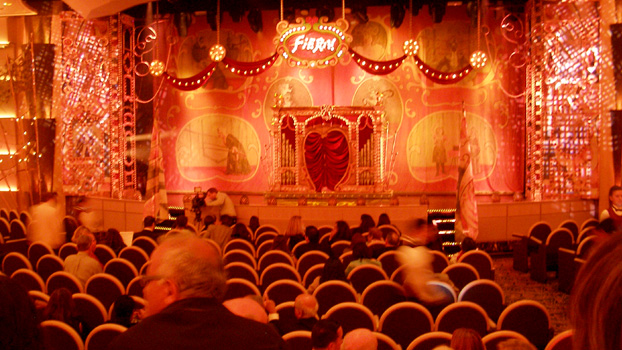 Our next day, thankfully, began at 8:45 am and would only be a “three hour tour”. We met our bus and tour guide for this excursion, and our first stop was the Senate Square. Carol Ludvig Engel’s architecture is very unique. It includes political, religious, scientific and commercial influences right into the heart and center of Helsinki.

Senate Square is made up of the oldest part of central Helsinki and its landmarks, including the square, the Helsinki Cathedral, the Government Palace and the main building of the University of Helsinki. It also has the Sederholm House, which is the oldest building in central Helsinki, dating back to 1757. 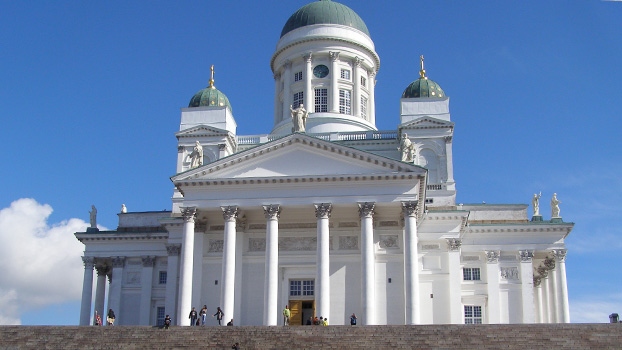 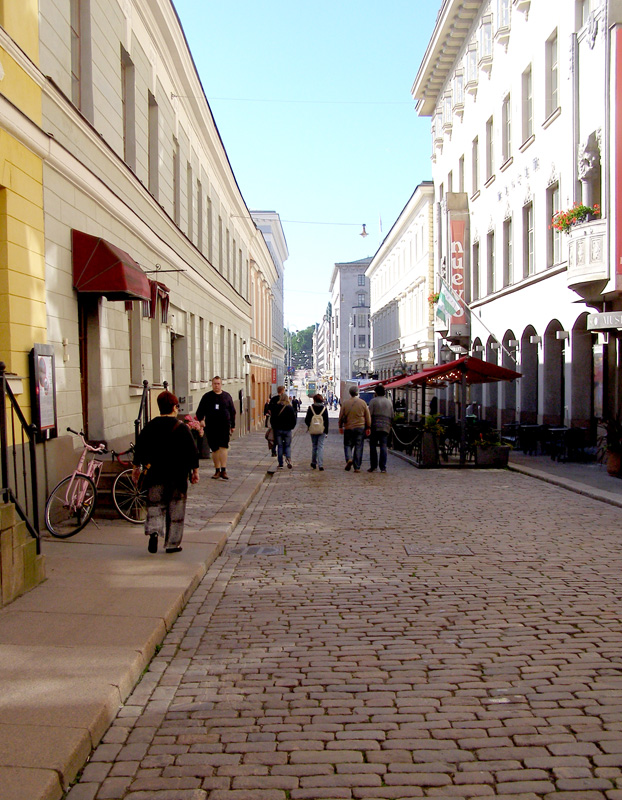 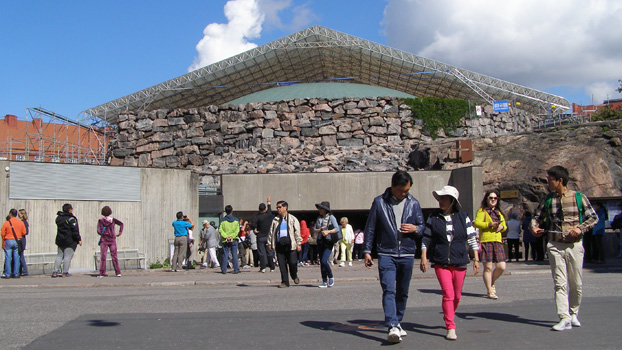 We then visited Helsinki’s famous Rock Church (Temppeliaukio Church or Church of the Rock). This Lutheran church was designed by architects and brothers Timo and Tuomo Suomalainen in the Töölö neighborhood and opened in 1969. The church is built directly coming out of and into the solid rock. It was really beautiful. The church’s furnishings were also designed by the architects, and the organ, built by Veikko Virtanen, who also manufactured the organ, has 43 stops and 3001 pipes. 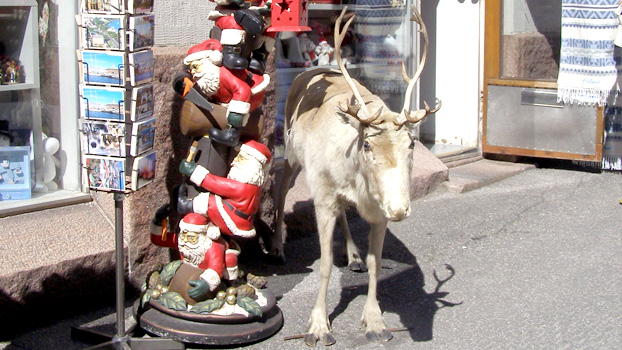 Santa and His Reindeer

On our way to our next stop, we passed the Olympiastadion (Olympic Stadium). This was to be the sight of the 1940 Olympics, which were originally to be held in Tokyo but moved to Helsinki, and was then cancelled due to World War II. Helsinki finally did get to host the 1952 Summer Olympics instead. The stadium has seen several renovations, the last of which was in 2005, when it hosted the World Championships in Athletics.

For all of you American TV reality show Amazing Race fans, a leg of the 2006 season with that episode ending at the Olympic Stadium Tower. It has also hosted many concerts featuring Michael Jackson, U2, Madonna, Bon Jovi, Bruce Springsteen, and most recently One Direction. The stadium is scheduled for another major renovation that will close it starting in 2016 and hopefully reopening in 2019.

Our last visit in Helsinki was the Sibelius Monument and Park. This park is dedicated to the Finnish composer Jean Sibelius (1865-1957). The monument was sculpted by Finnish artist Eila Hiltunen entitled, Passio Musicae, and was unveiled in 1967 amid many lively debates about the merits and flaws of abstract art. The monument consists of more than 600 steel pipes welded together in a wave-like-pattern. The intent was to abstractly capture the essence of Sibelius’ music. A smaller version of this monument is located at the UESCO headquarters in Paris. There is also a conceptually similar work located on the grounds of the U.N. headquarters in New York City.

The second sculpture was a direct nod to Sibelius himself. 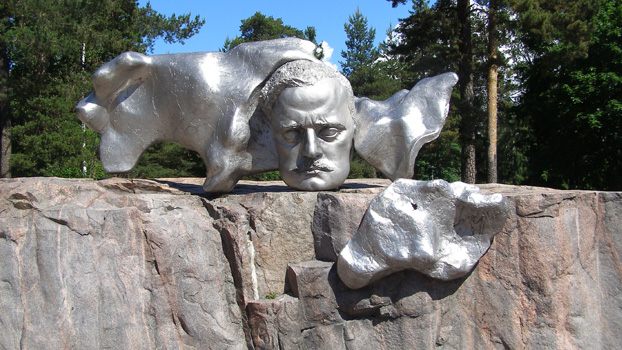 We returned to the ship, and had lunch in the Horizons Bistro. I was staying in Copenhagen for 6 days after the cruise (more on that later), so I needed to do some laundry. This ship actually had a laundry room on each floor. Dianne and I both started some packing to get a head start on getting stuff we wouldn’t need again out of the way.

Tonight was our last formal night, so we got dressed up again and went back to the Symphony Dining Room and our team for dinner. My dinner consisted of:

Pellegrino and Amarone della Valpolicello, 2011
Chilled Apple Soup
Ravioli with Mushrooms
Beef Wellington with Veggies and Potatoes
Chocolate and Pistachio Crème Brûlée
After dinner, we attended the show in the Princess Theatre entitled “Fiero”, featuring the Regal singers and dancers. We then finished our evening enjoying Rhapsody in the Piazza while sipping our Frangelico® and sambucca on the rocks before bedtime.

We have our last stop in Stockholm, Sweden tomorrow…