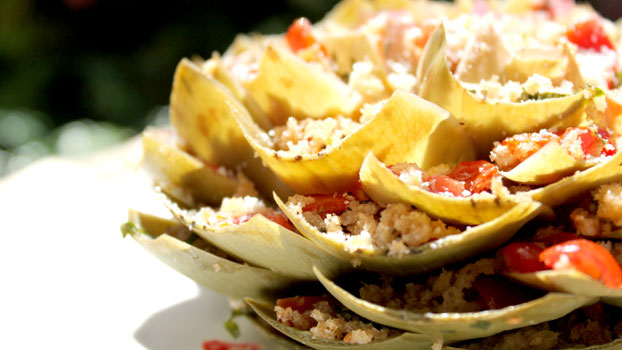 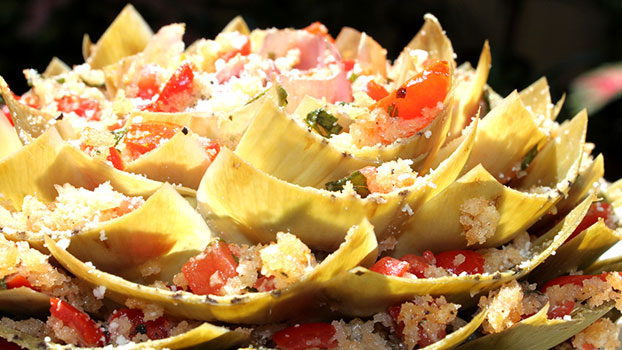 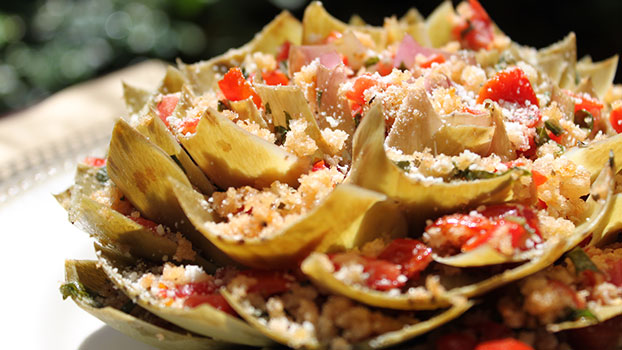 Artichokes are one of my favorite vegetables and they are so versatile. Growing up in an Italian family, stuffed artichokes were a holiday staple. My Grandmother would stuff them dry and then pack them into the pressure cooker. She was a master at this. I do remember though, being over at a family friend’s house the day before Easter one year while the artichokes were cooking and we heard this large explosion from the other room.

Thankfully, no one was hurt, but my Mom, our family friend and the kitchen walls, ceiling and floor was totally covered with artichokes and stuffing! There was even a big dent in the ceiling where the lid hit! You have to be very careful not to overstuff your pressure cooker. You also have to be sure you have a good seal and that the relief valve is functioning properly and the steam escape is totally clean. The pressure cookers these days are made much safer, but you still have to be careful.

Working with a pressure cooker can be very efficient. I learned to use one while I was living on my sailboat in the Caribbean. I had a propane gas stove and propane was pretty expensive. Also, we didn’t have A/C on the sailboat, and although we had great trade winds, the galley on the boat had been known to reach temperatures of about 120°, so efficiency was key!

I used to pressure cook everything from stuffed artichokes, shredded beef or pork for BBQ sandwiches, braising, soups, stews… The list goes on and on. Don’t be afraid of this magnificent cooking method. As long as you adhere to the directions, you’ll absolutely love this cooking method. I would recommend you look into purchasing one for yourself!

Now, back to the artichoke… Living in the tropics and now South Florida, I thought I’d try to lighten up this recipe and make it something I could enjoy year round instead of just during the colder months of the year.

This recipe calls for steaming or simmering the artichoke unstuffed. When cooked, you’ll remove it from the liquid and gently turn it over to cool. You’ll make your light and summery stuffing, with the emphasis on tomatoes with a lot less bread crumbs, on the side and loosely stuff the artichoke right before serving.

There’s so many additional ingredients you can add to the stuffing. I use Panko for a lighter and more airy stuffing. Try adding chopped prosciutto, diced green onions, cooked pancetta, diced zucchini, sundried tomatoes; or try switching out whole wheat couscous for the bread crumbs … the variations can be endless. 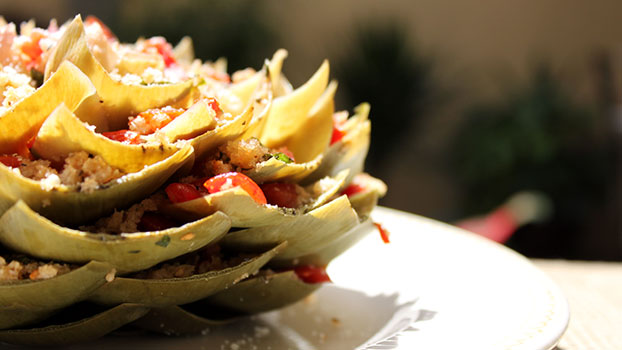