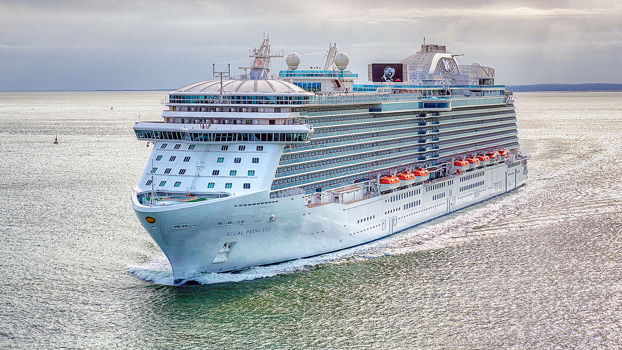 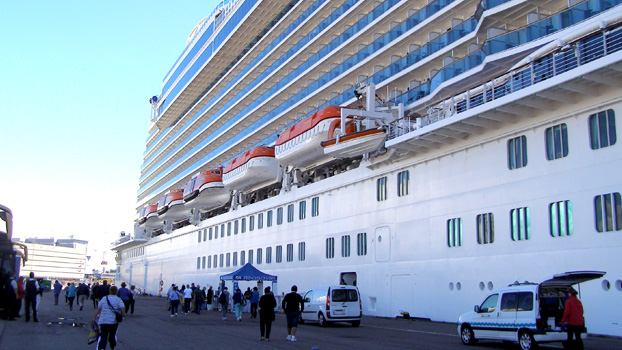 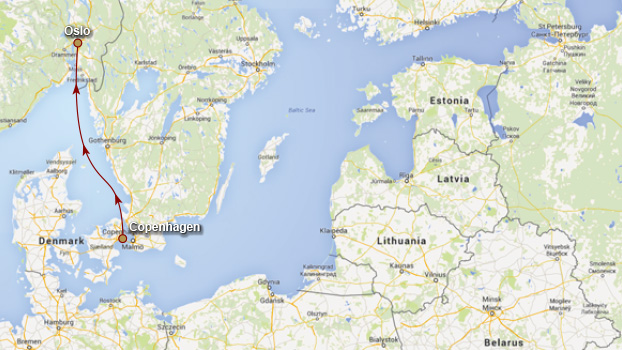 Day One — Copenhagen to Oslo on The Regal Princess, Baltic Cruise 2015.


As you know from my blog article entitled “An Upcoming Baltic Adventure” posted on June 8, I left for an 11 day adventure aboard a gorgeous and the currently newest Princess Cruise Lines ship. The cruise originated in Copenhagen, Denmark. I then was extremely fortunate to be invited to stay at my dear friend Lizzie’s daughter’s home in Copenhagen very close to the center of the city. What a wonderful visit, but more on that later… I want to start at the beginning and break this up into manageable articles.

I flew Norwegian Airlines on June 14, and I arrived in Copenhagen on June 15. There is a 6 hour difference in time zones. I met up with my cousin, Dianne, in baggage claim. She traveled from Boston to Copenhagen via Reykjavik, Iceland and we managed to arrive at baggage claim at almost the same time.

We then met up with our transfer bus and we were transported to our ship, the Regal Princess. We received our cruise cards, and then found our way to our mini-suite. It was great! We had our requested twin beds, lots of storage, a full bathtub and shower, and living area with a pull out couch, desk, and a large, widescreen screen TV. The best part of the room for me, however, was the balcony and full glass sliding doors. We were on Deck 11, so we were high enough to have spectacular views!

We left port, our luggage arrived, and we were greeted by our steward, Julie (a very sweet young man from the Philippines). He brought us each a glass of champagne, and showed us the ins and outs of our cabin. We then had to don our life jackets and commence with the mandatory emergency drills. Not fun, but necessary.

We had dinner that evening in the Symphony Dining Room and met our dining room team who would be taking care of us throughout our cruise. Lotfi, our head waiter, is from Tunisia; Orland, our waiter and Michael, our assistant waiter, are from the Philippines also. We had lots of occasions to interact with Silvio, our Italian maître d’hôtel as well as Caesar, also a head waiter, who hails from Bulgaria. They were all fantastic at their jobs, and all around great people. I promised to give them an honorable mention here. You guys are fantastic! Who knows, you might see me again when the ship returns for the Caribbean cruises that originate in Fort Lauderdale.

That evening I had my first great meal in the Symphony Dining Room, while being pampered by our Team… 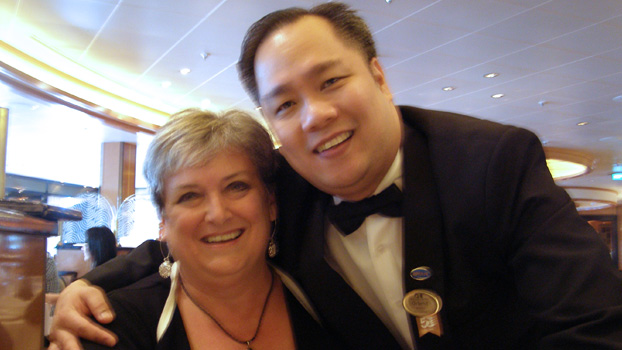 Orland and Peg in the Symphony Dining Room, The Regal Princess. 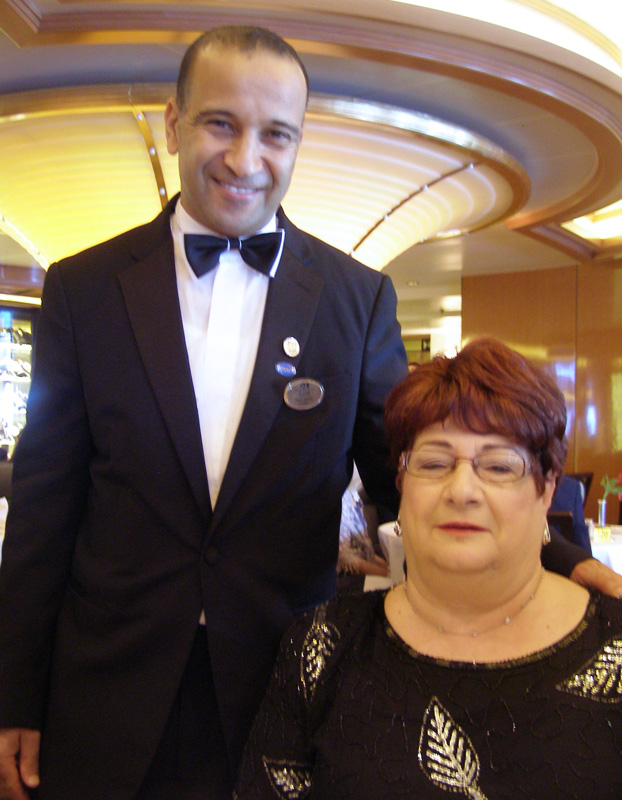 Lotfi and Dianne in the Symphony Dining Room, The Regal Princess. 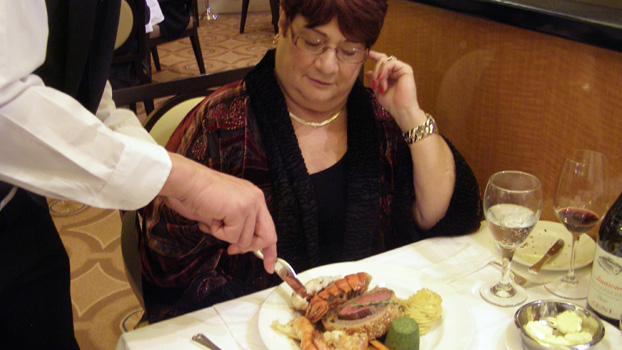 
We toured the ship, attempted to go up to the Lido Deck, but it was rainy and cold, so back down to where all the action was for a short time. After traveling, we decided to retire early and get our unpacking completed so we could be rested for our next day’s excursion in Oslo, Norway. We both slept like babies while the ship cruised along at an impressive 20 knots.


The Fjords heading into Oslo…

The next morning, we awoke to the slow advance through the Fjords heading into Oslo. My gosh, they are spectacular! The islands all had quaint and colorful cottages; small marinas, a ferry dock, and looked idyllic. We arrived at the dock and we proceeded first to breakfast at the Horizons Bistro, where there is everything you could ever imagine waiting for you to choose, and then on to our designated meeting place for our “Best of Oslo Excursion Tour”. 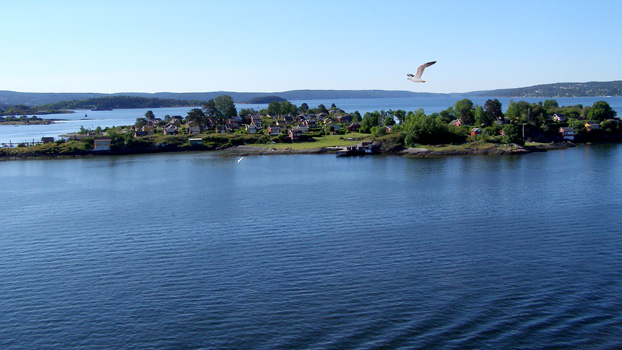 Norsk Folkemuseum, the Norwegian Museum of Cultural History at Bygdøy

We visited a very interesting living museum called, Norsk Folkemuseum, where you walked through a typical ancient town and got the opportunity to stroll through their enchanting buildings. This museum features the daily life and living condition in Norway from the 16th century to present time. It is Norway’s largest museum of cultural history featuring the world’s oldest open air museum and large indoor collections. We then reboarded our bus and were shown a 100 year old ski jump. Oh my! It was spectacularly high. Its design and structure actually looked modern and scary all at the same time. 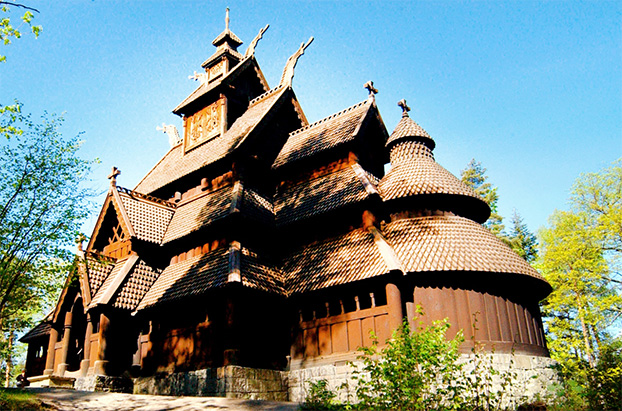 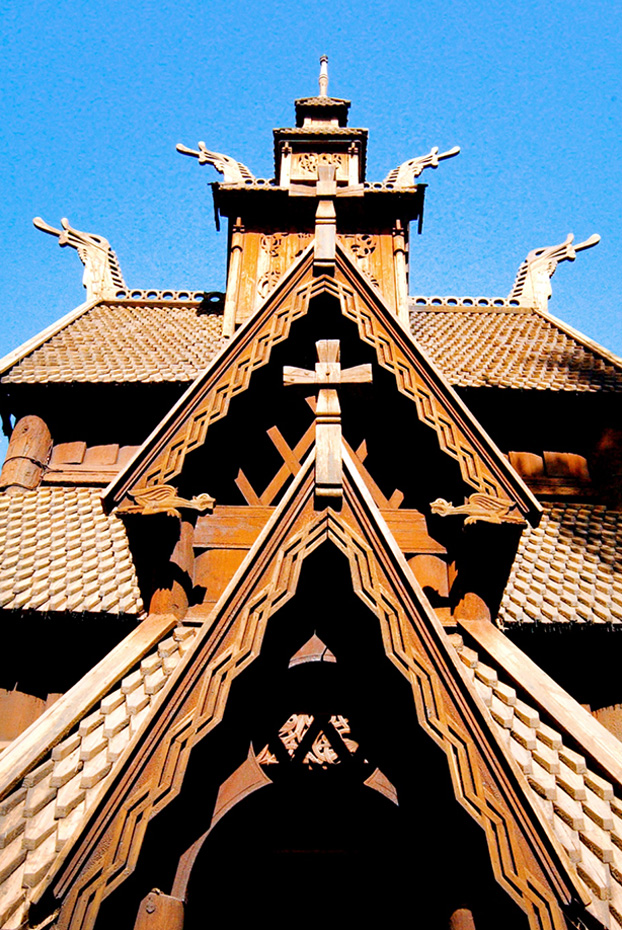 We reboarded the bus again and were taken to the amazing Gustav Vigeland Statuary Park and Gardens, which is the largest exhibit in the world dedicated to one sculptor. He produced 212 statues using bronze, stone and iron. All of them were human figures depicting the human condition at all stages of life, from birth to childhood to adulthood to old age and death. There is a central fountain surrounded by statues of the life cycles of a girl, the girl growing up, meeting a young man, marrying, having a child, the child grows up, and the mother and father grow old, and eventually pass on. It all takes place in and around these amazing trees from their corner of the world. 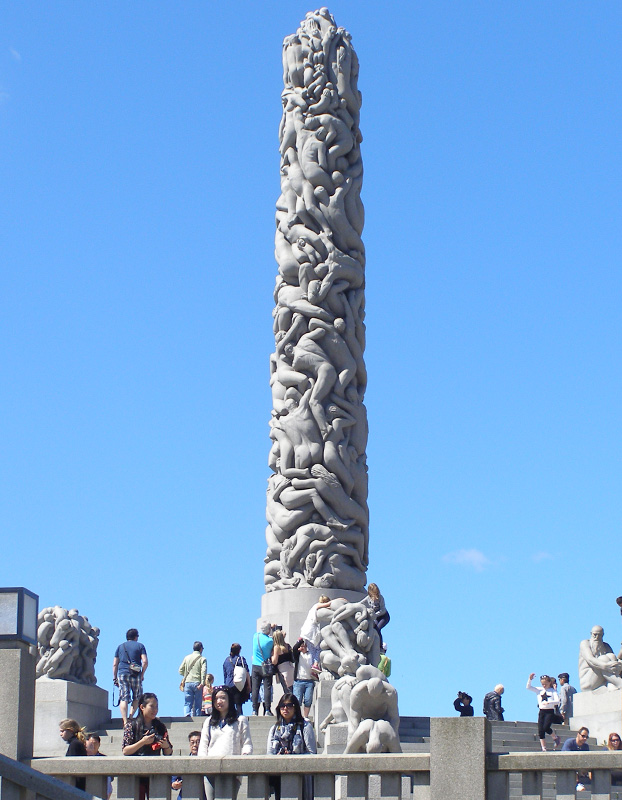 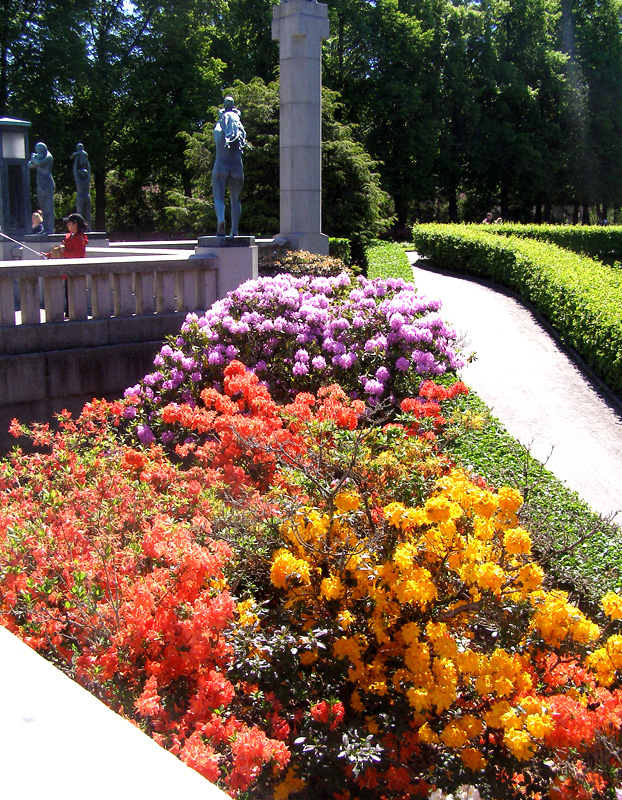 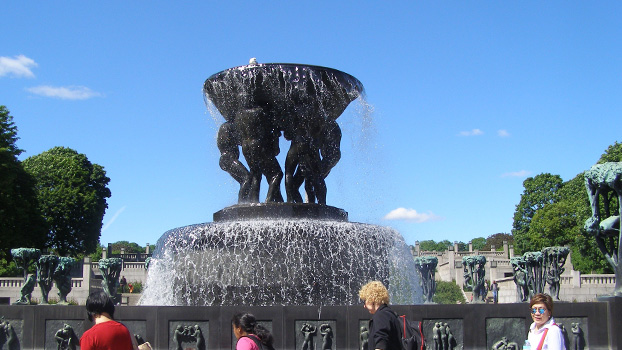 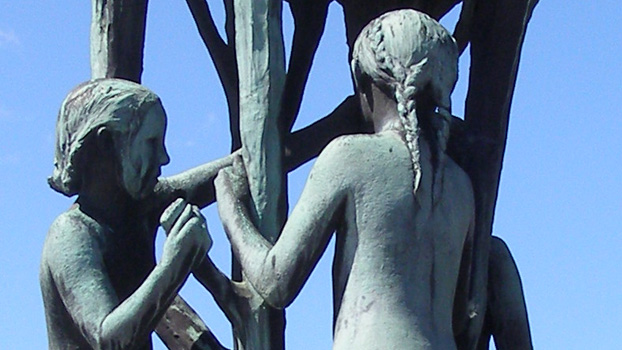 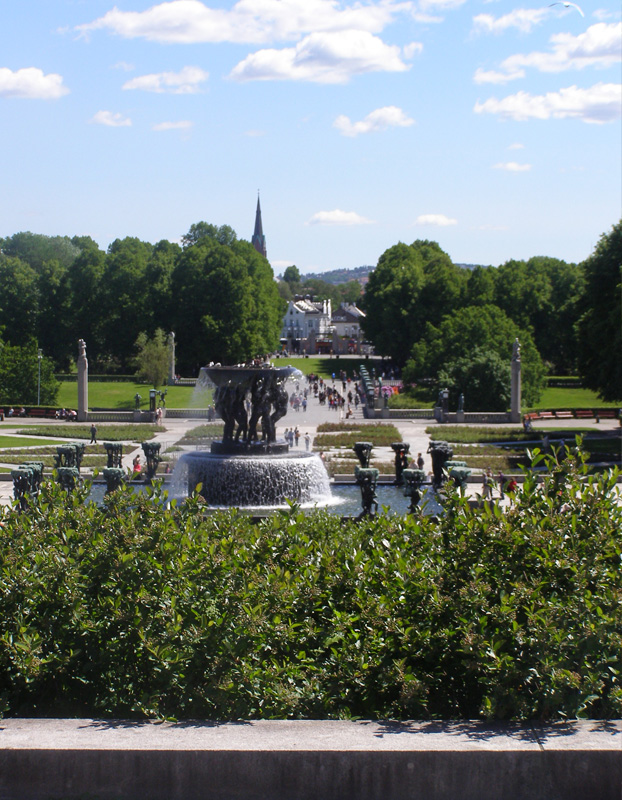 The view of the park from the Obelisk at Vigeland Park
Oslo, Norway 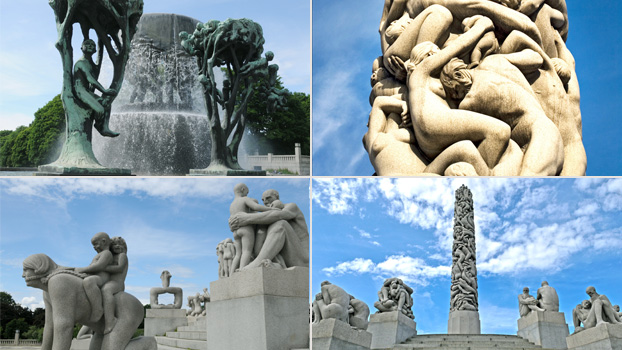 The Statues at Vigeland Park.


We returned to the ship and had a quick lunch at the Horizons Bistro; then went for refreshments near the pool and were treated to Juan Carlos’ juggling act of bottles…very entertaining. It was a gorgeous day with lots of boaters out and about. The temperature was in the high 60’s to mid-70’s. A spectacular day.

Dinner that evening in the Symphony Ding Room consisted of:

We decided to try several of the wine tastings, and Lotfi, our Head Waiter was successful in getting us reservations at Sabatini’s Super Tuscan Wine Tasting… Our favorites were the Luca Della Vite and the Argentiera, 2012. 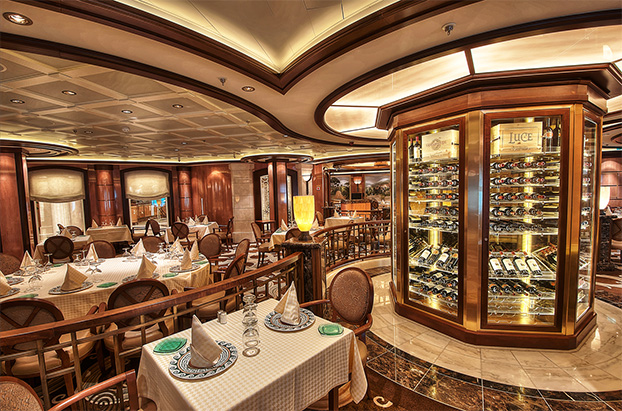 
We attended a GREAT show in the Princess Theatre entitled, “Fireworks on Four Strings”. It turned out to be a spectacular Welch violinist named, Christopher Watkins. If you get a chance to see him, don’t pass it up. You can also Google him and come up with lots of options. He is one of Princess’ top performers and he travels from ship to ship. He is now heading to Australia to work. Check him out:

After the show, we headed to The Piazza for the Classic Rock and Roll Party with Rhapsody. 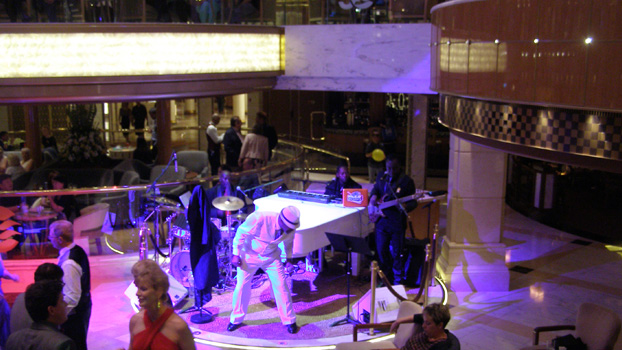 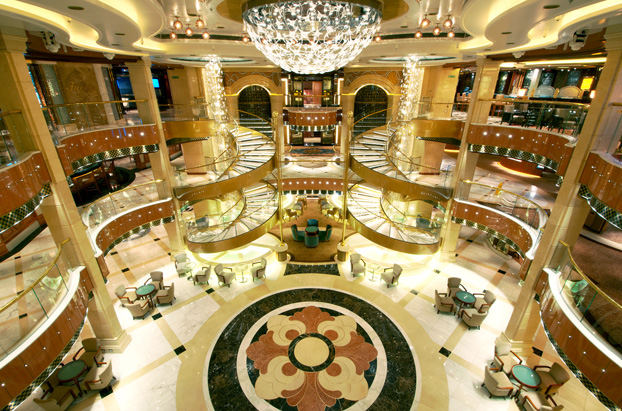 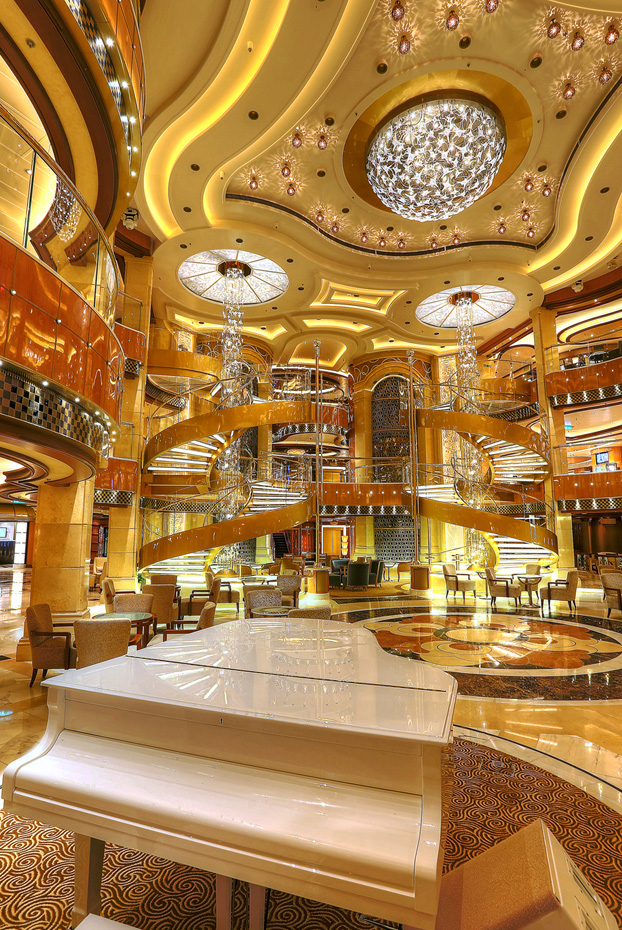 
Lotfi was also able to confirm our reservation for Monday, the 22nd, at 7 pm for the Chef’s Table, Lumiere. That experience will be coming later and deserves its own blog article. 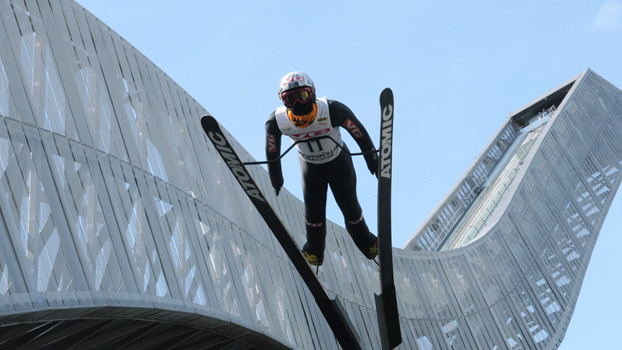 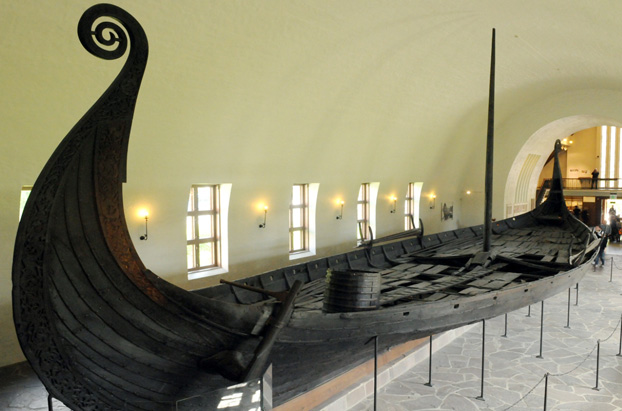 The Viking Ship Museum is located at Bygdøy in Oslo, Norway. It is part of the Museum of Cultural History of the University of Oslo.