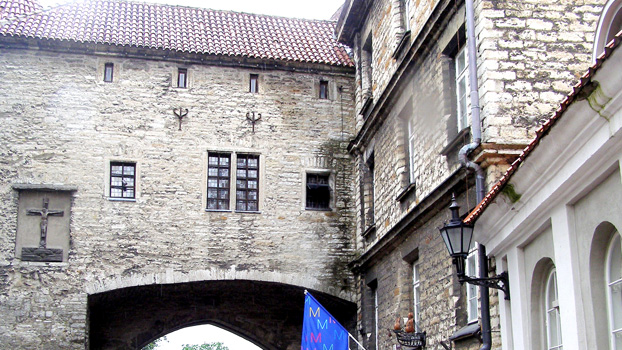 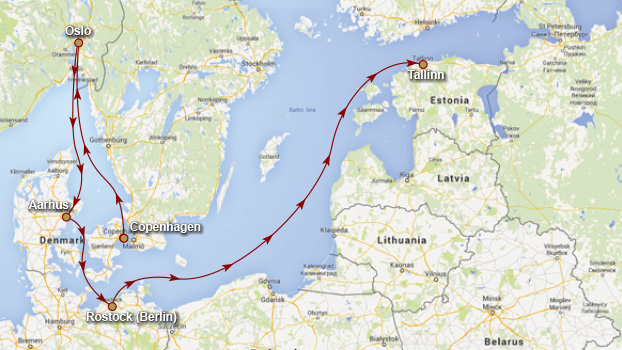 I would have liked to sleep in, but I had a 9:30 am reflexology massage booked, which ended up being more important than sleep for my over worked feet. So, we were up and about and at the Horizon Bistro for a quick buffet breakfast. Dianne was also scheduled at 9:30 am for a 2 hour seaweed wrap. With my feet gleefully singing to me, I went gift shopping on board while I waited for her to get de-weeded. My reflexology massage was so fantastic, I booked another one for our next “at sea” day after leaving St. Petersburg and Helsinki – I’ll definitely need it! 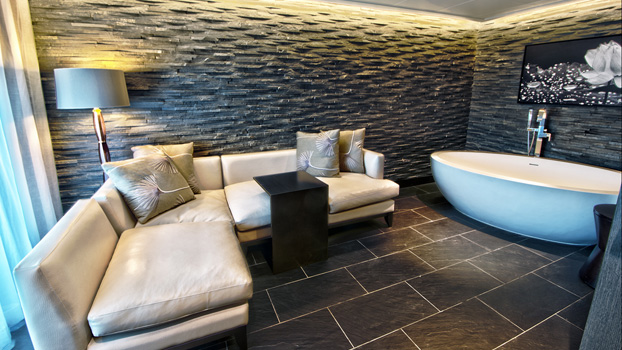 I wasn’t planning on a lot of gift shopping. I only wanted a few things for my Uncle Bill and Aunt Pat, who were house and dog sitting for me. I also wanted to get a small set of nesting dolls for my Russian elderly neighbor. I knew she would enjoy them. My uncle got a traditional t-shirt, and my aunt got a lovely pair of amber earrings.

I also purchased a Russian wooden Santa for my collection. This guy will make a great addition! 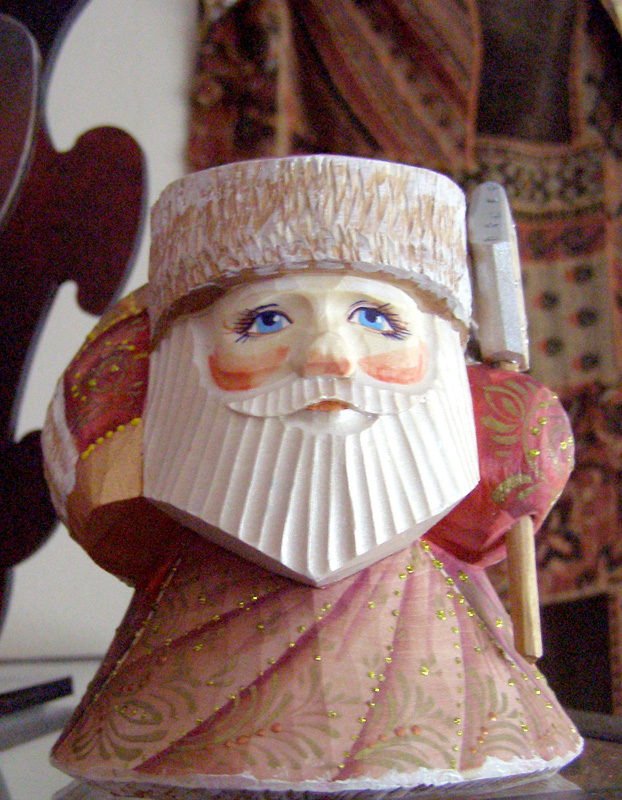 I wrote in my journal from the balcony, as it was one of our warmer and dryer days. We then attended Sabatini’s Super Tuscan Wine Tasting event. It was incredibly informative and was kicked off by Silvio, the ship’s maître d’, and hosted by our head waiters, Lotfi, Caesar, and several other head waiters from the other dining room. The wines were of different varietals, such as Solaia, Ornellaia, and Masseto, which are based on Bordeaux varietals like Cabernet Sauvignon and Merlot, and Tignanello blends from Tuscany’s own Sangiovese and these Bordeaux varietals. Each was matched with a small appetizer to complement each other:

After the wine tasting, we tried to walk a little of it off by going around the pool deck a few times and enjoying the salty sea air. We then took a quick nap to be ready for our first formal evening. We got dressed up and had a delectable dinner, which I forgot to write down! After dinner there was a show in the Princess Theatre and then music and dancing in the Piazza. The ship was rockin’ as we celebrated Princess Cruises’ 50th year with an extraordinary cake ceremony and a festive balloon release in the Piazza – lots of dancing! 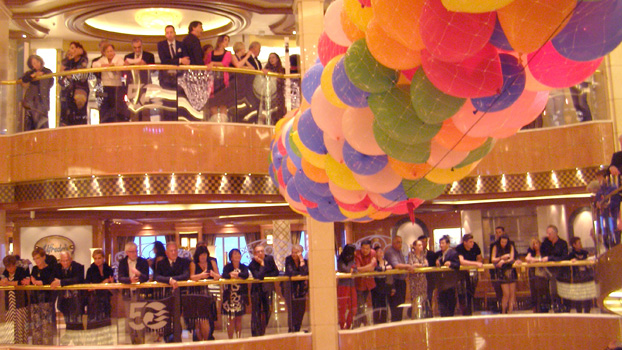 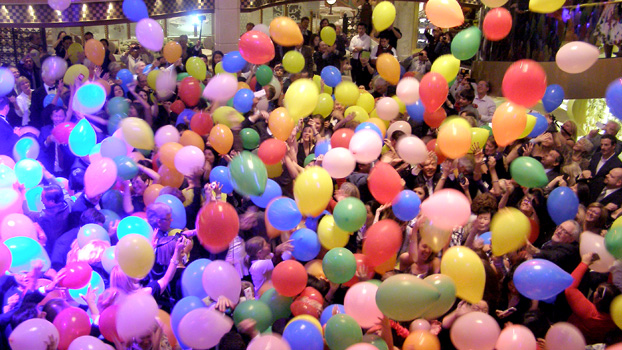 We were cruising during the longest day of the summer. I couldn’t get over the midnight sunsets and the 3:30 am sunrises. This photo was taken at 11:50 pm. Gorgeous! 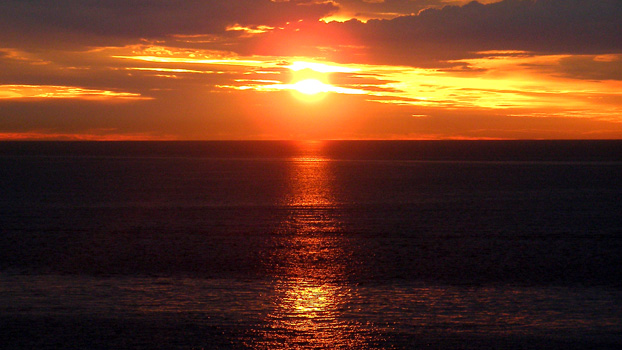 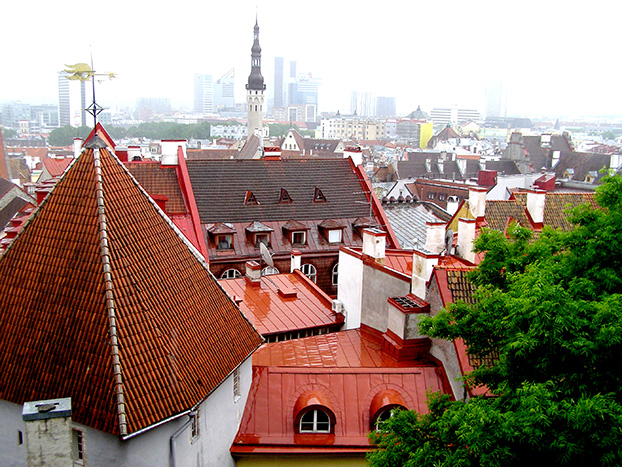 Tallinn is an exceptionally complete and well-preserved medieval northern European trading city on the coast of the Baltic Sea. 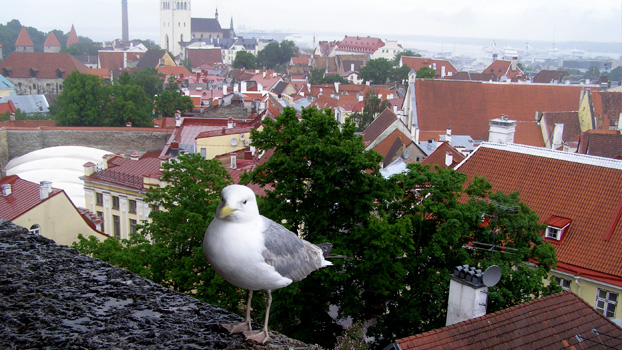 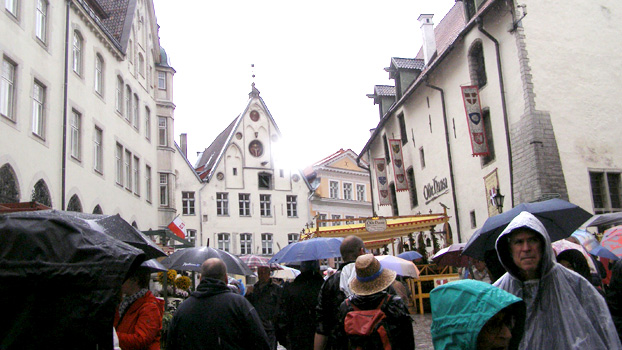 The walking tour of Tallinn began at 8:45 am on Toompea Hill, and it was a cold, raw and rainy morning. However, this charming medieval city and our tour guide, Annie, who was politically and culturally well informed, and VERY funny, made the weather hardly noticeable. She gave us headsets and we were always connected to her, which was great because it made the guided tour so much easier and enjoyable. She also had a coffee and pastry stop planned in a beautiful ancient wine cellar. It was cozy, and the sweet and savory pastries were exceptional. The Historic Centre (Old Town) of Tallinn is an exceptionally complete and well-preserved medieval northern European trading city on the coast of the Baltic Sea. It was founded in 1154 and is now a United Nations Educational, Scientific and Cultural Organization (UNESCO) World Heritage Site. This organization’s mission is to encourage the identification, protection and preservation of cultural and natural heritage around the world considered to be of outstanding value to humanity. I have to say here that Tallinn was among the top stops of the cruise. It was quaint, friendly, beautiful, and had an unique energy to it, which I found extremely appealing. 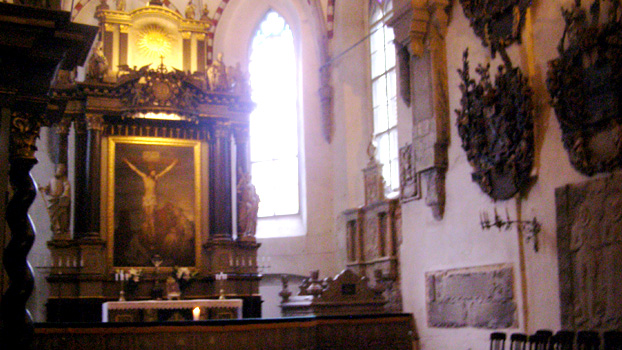 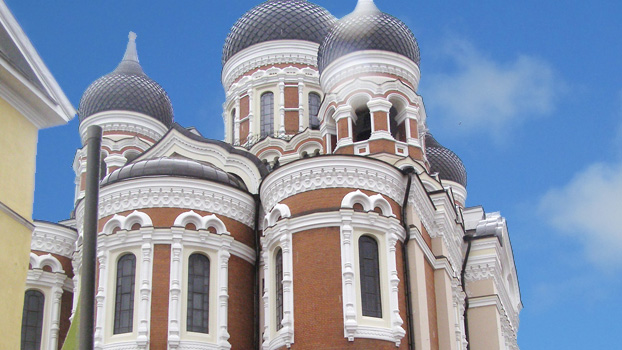 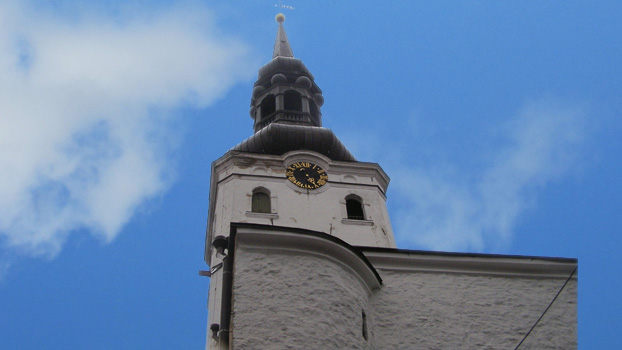 Tallinn is the capital city of Estonia. It’s oldest and main Lutheran church, Cathedral of St. Mary, sits in Upper Town along with the Alexander Nevsky Cathedral, a Russian Orthodox Cathedral, and Toompea Castle, home of Estonia’s Parliament, Riigikogu. We descended from Toompea Hill, which is named after the medieval stone castle, down a limestone hill in the historic centre. The entire hill is oblong and about 400m by 250m (about 7 hectares). Standing next to the castle is Pikk Hermann – a tower some 150 feet in height. Also located in this area is St. Olav’s Church. It’s tall, white with gray tower was considered the world’s tallest building in the world between 1549 and 1625. This gothic church’s spire is 124 meters/406 feet high.

The rain finally started to drizzle and then stop, so we got in a little shopping before completing the tour and heading back to the Regal Princess.

We had booked another wine event at Sabatini’s, only this time it was a Tuscan dinner and wine pairing. We were seated at a table of 12 and met some incredibly nice and interesting people. Our dinner consisted of:

After dinner, we returned to the Piazza with Rhapsody again as our entertainment. We had a few cocktails and Dianne participated in the May Pole festivities.

Back in our suite, we set up a 5 am wake up call for our 6:15 am excursion. The seas were foggy and calm, and looked of glass. 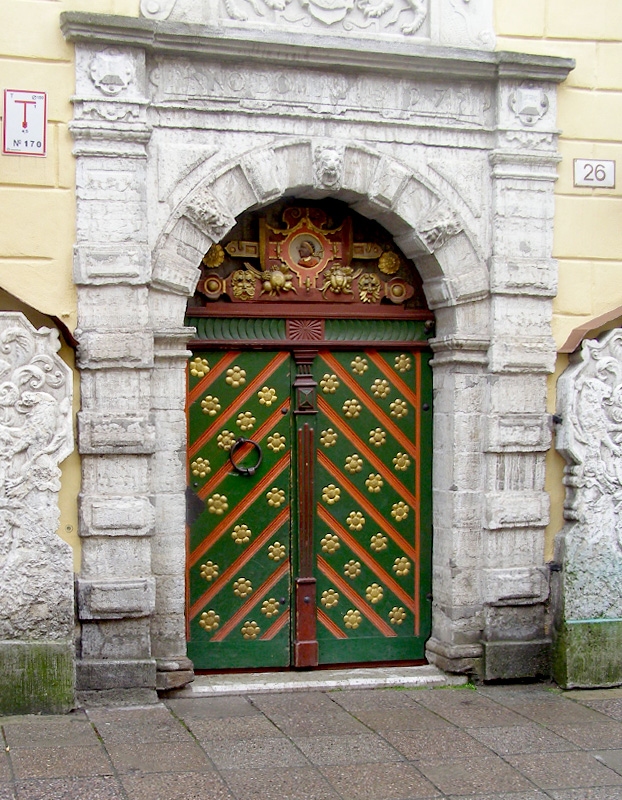 House of Brotherhood of Blackheads–One of the most photographed and visited doors in Tallinn. 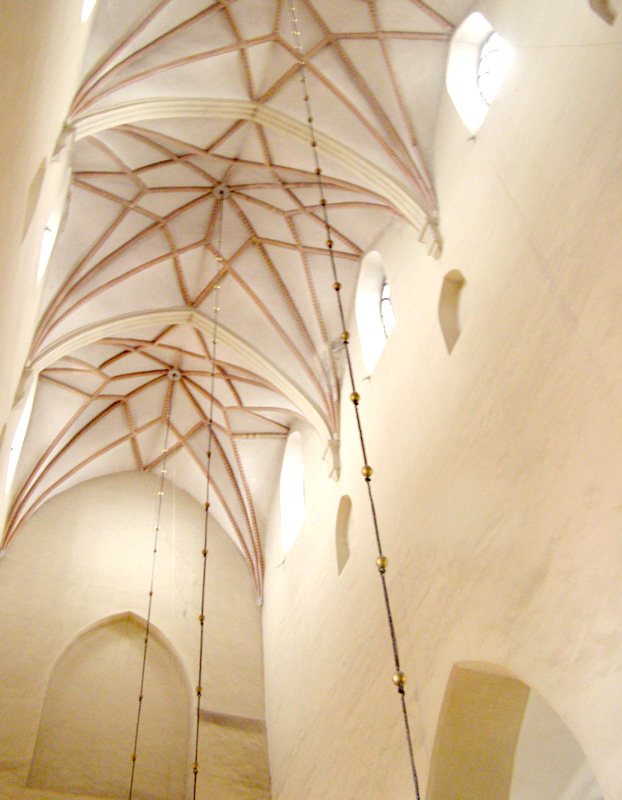 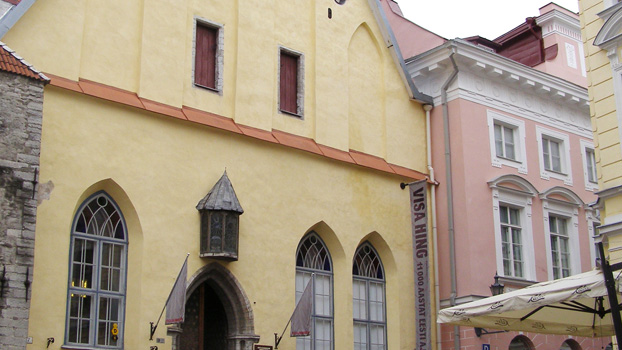 The Brotherhood of Blackheads was an association of local unmarried merchants, ship owners, and foreigners that was active in Estonia and Latvia from the mid 14th century till 1940. It was founded as a military organization… Read more at Wikipedia 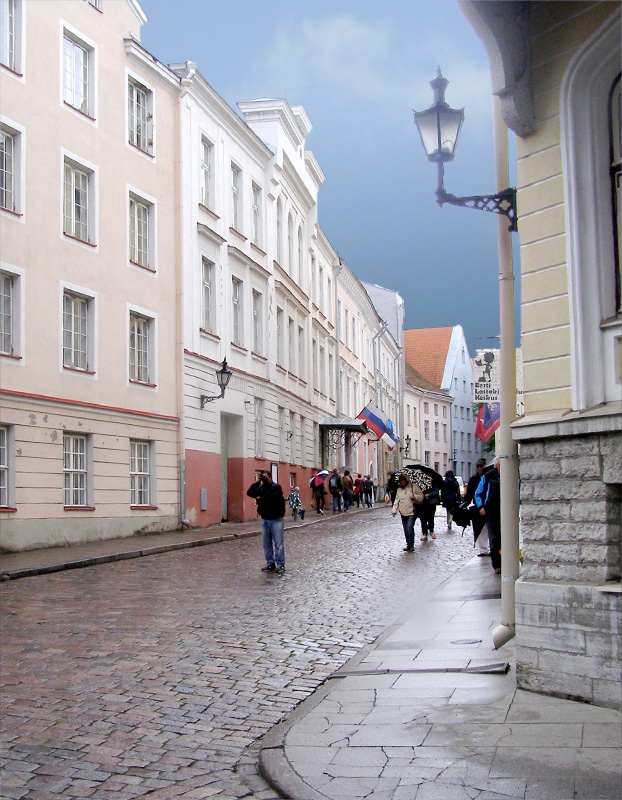